Information technology has a revolutionary impact on our society. It has boosted freedom of communication and democracy but has also led to new approaches to surveillance and is increasingly used to impose restrictions on fundamental rights. In the past year, we worked hard to ensure that your rights and freedoms in the online environment are respected when they are endangered by the actions of political bodies or private organisations.

Sadly, 2015 was a year in which our rights and freedoms were endangered on multiple occasions. In response to the terror attacks in Paris, Europe’s governments were quick to react to the tragedy by calling for more surveillance, ignoring the failures of existing measures. At the EU level, this meant the rushing of anti-terror measures (Directive on combating terrorism), a big push for the adoption of the previously rejected proposal for the monitoring of air passengers (EU PNR) and the launch of initiatives to push Internet companies into voluntary censorship measures.

But there were also successes, especially with regard to data protection and the demise of the “Safe Harbor” agreement. Our key campaigns were heavily focused on driving a positive agenda – for a conclusion of the data protection reform package, for the upholding of equal access to the Internet (net neutrality) in Europe, and for a reform of the EU’s outdated copyright framework. For copyright, we want to improve access to knowledge and culture online, thereby indirectly reducing incentives for invasive enforcement mechanisms. We also worked on privatised law enforcement by Internet companies as well as trade agreements (both of which are horizontal topics that touch virtually all digital rights issues).

Last but not least, we’ve been preparing for the future. In March 2015, EDRi’s members agreed on a multi-annual strategy and decided on the organisation’s four key focus areas for the next years (data protection and privacy, surveillance, network neutrality and copyright reform).

You can find the full annual report 2015 here (pdf) and our transparency report there (png). You can also check out our press review 2015, our responses to public consultations last year and, last but not least, you can find a neat overview of our biggest achievements below: 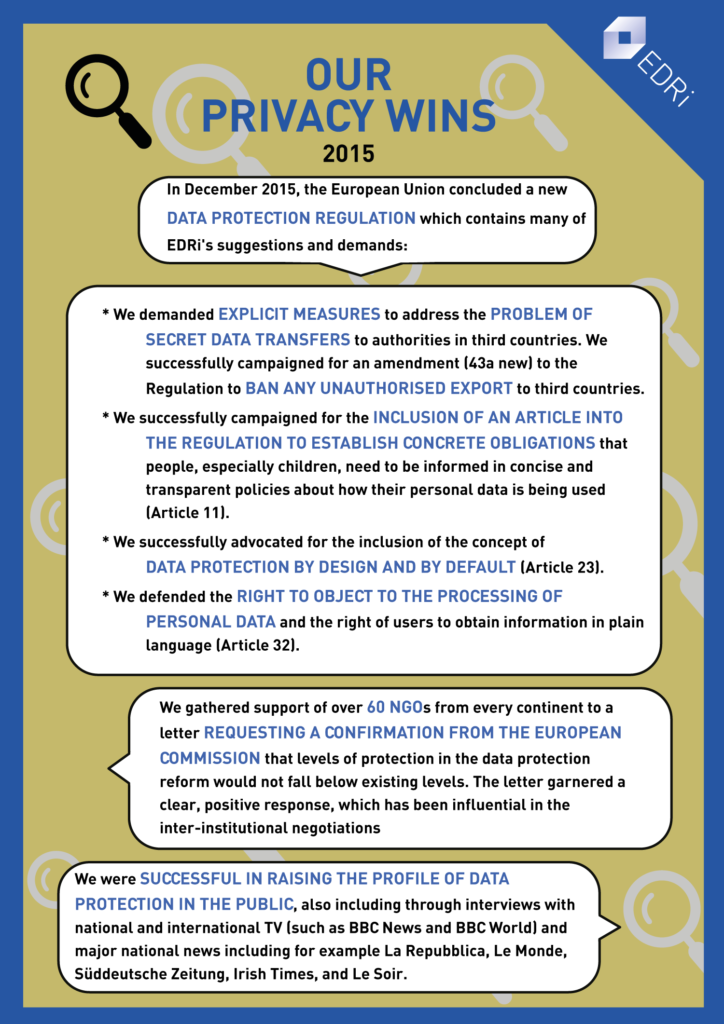 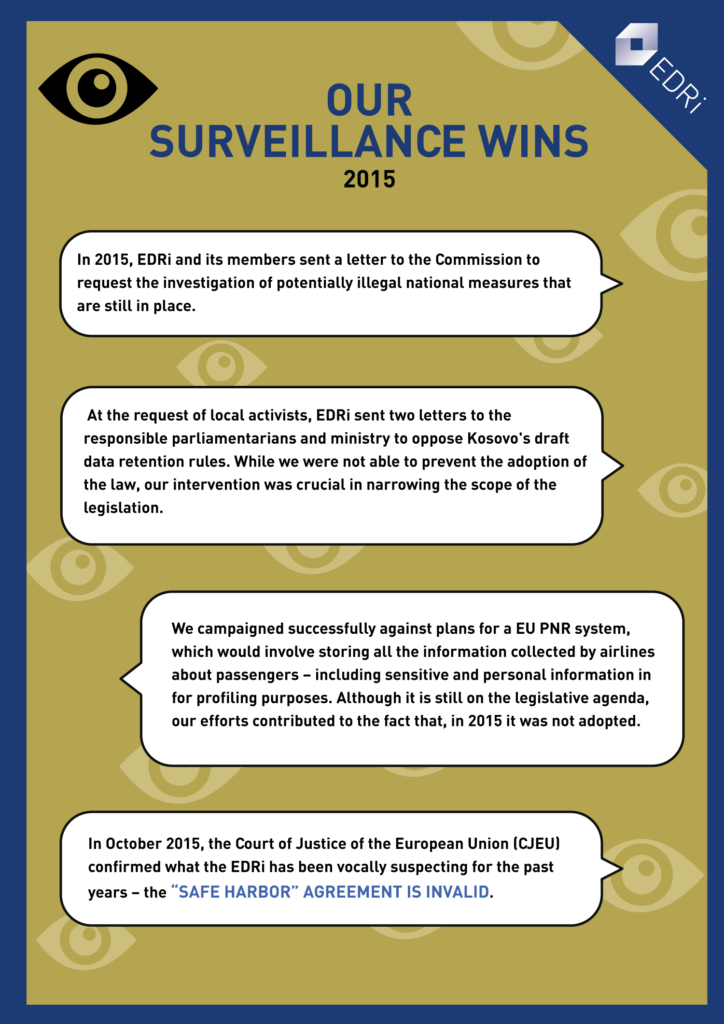 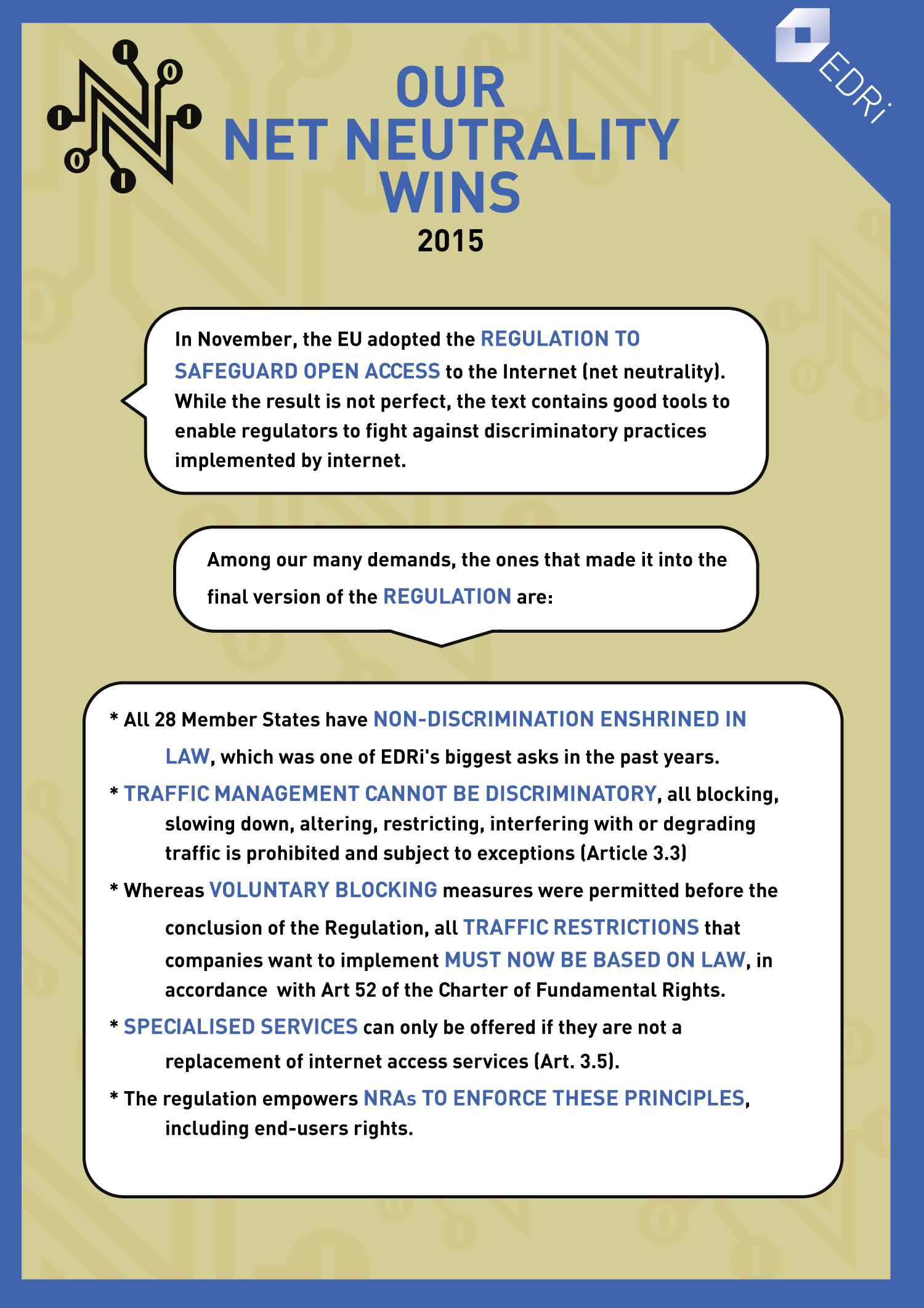 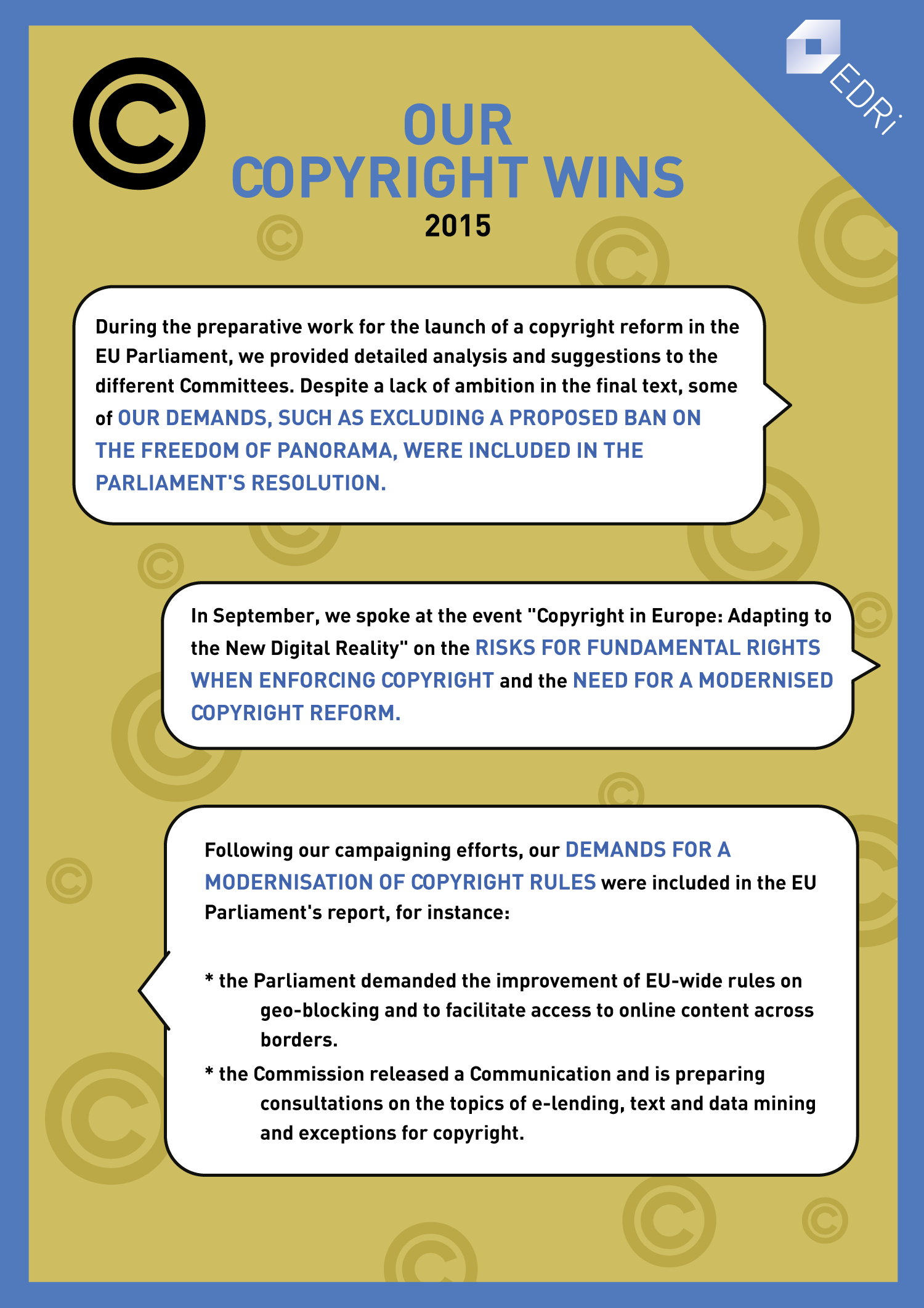 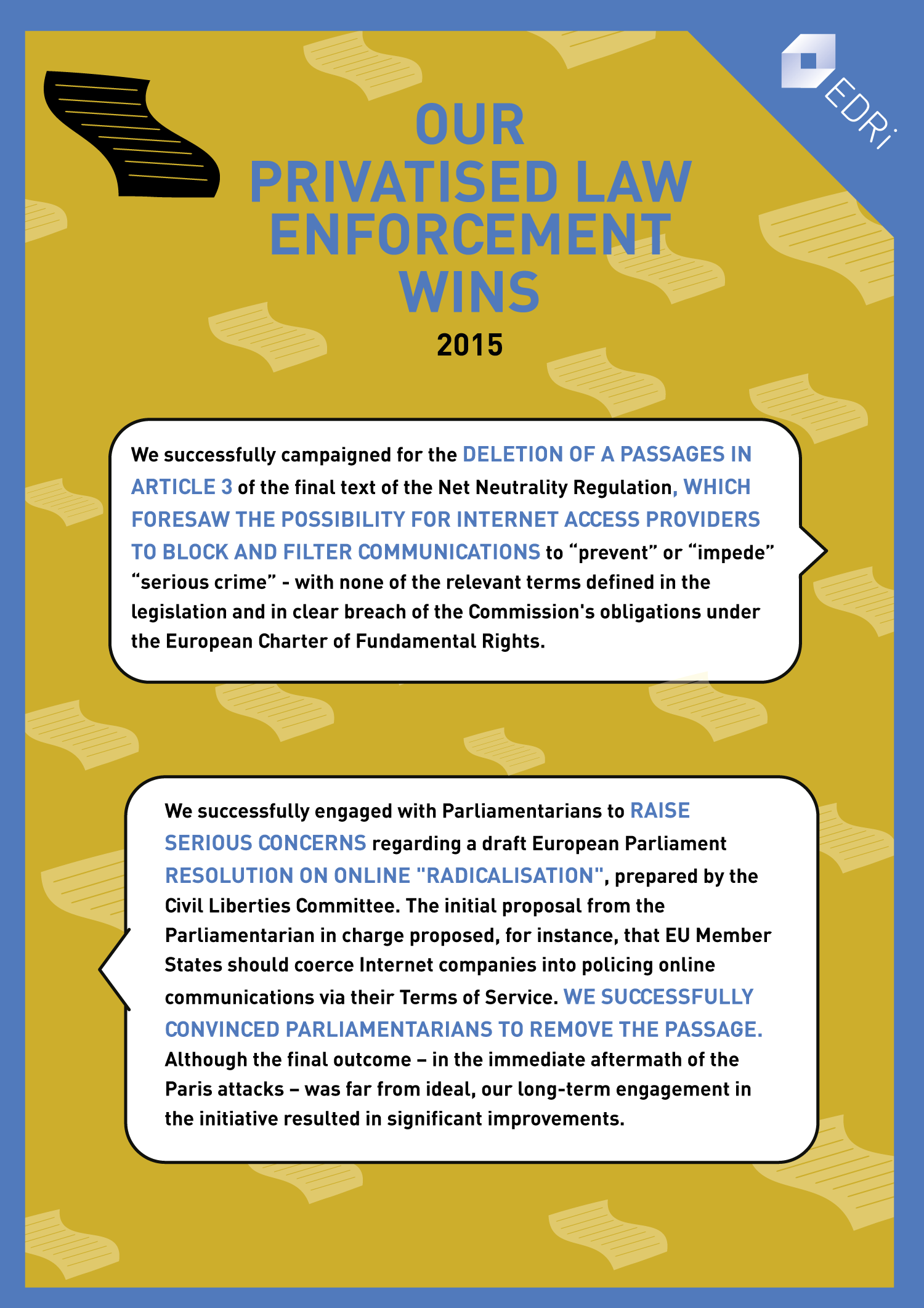 Our material on privatised enforcement 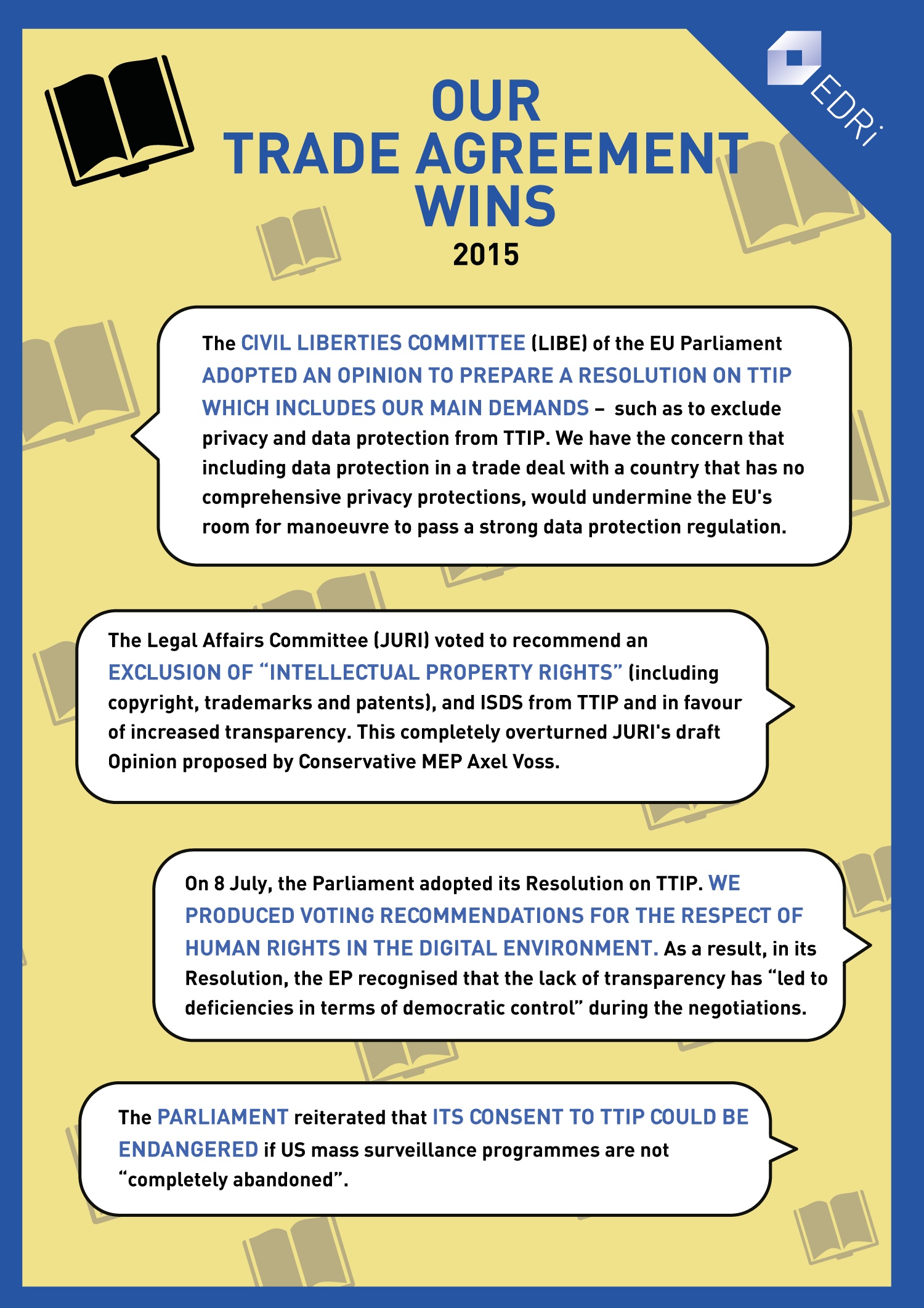