Across Europe, highly intrusive and rights-violating facial recognition and biometric processing technologies are quietly becoming ubiquitous in our public spaces. As the European Commission consults the public on what to do, EDRi calls on the Commission and EU Member States to ensure that such technologies are comprehensively banned in both law and practice. 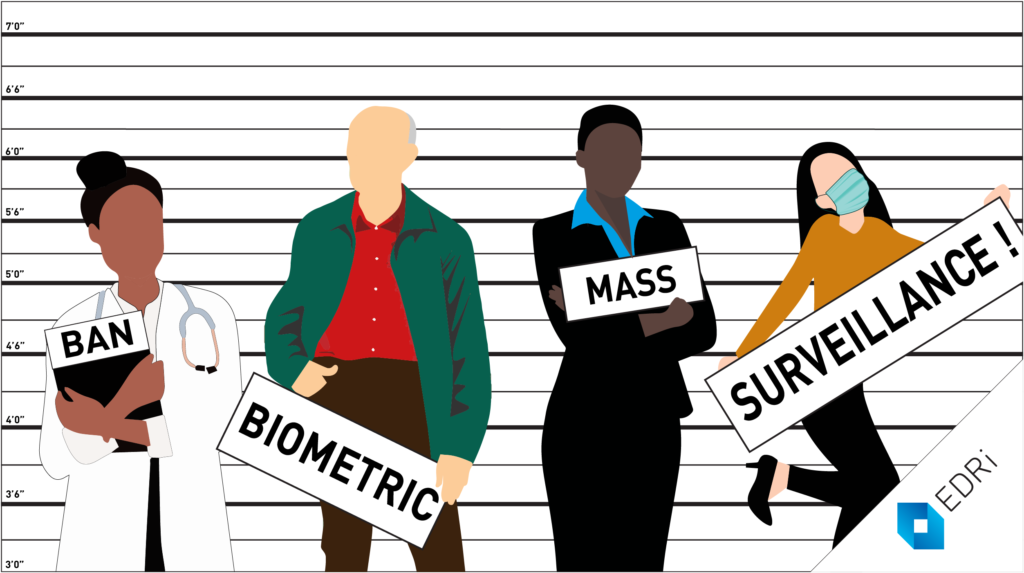 Keep walking. Nothing to see here….

By the end of 2019, at least 15 European countries had experimented with invasive biometric mass surveillance technologies, such as facial recognition. These are designed to watch, track or analyse people, score them, and make judgements about them as they go about their daily lives.

Worse still, many governments have done this in collaboration with secretive tech companies, in the absence of public debate, and without having demonstrated that the systems meet even the most basic thresholds of accountability, necessity, proportionality, legitimacy, legality or safeguarding.

A few thousand cameras to rule them all

Without privacy, you do not have the right to a private chat with your friends, your family, your boss or even your doctor. Your activism to save the planet becomes everyone’s business. You will be caught when blowing the whistle on abuse and corruption, or when attending a political march that your government does not want you to attend. You lose the right to go to a religious service or Trade Union meeting without someone keeping an eye on you; to hug your partner without someone snooping; or to wander freely without someone
thinking you are being suspicious.

With constant mass surveillance, you lose a way to ever be truly alone. Instead, you become constantly surveilled and controlled.

Since the start of the Coronavirus pandemic, apps and other proposals have been suggested to rapidly expand bodily and health surveillance systems under the guise of public health. However, there is a real risk that the damage caused by widening surveillance measures will last long after the pandemic is over. For example, will employers remove the cameras doing temperature checks in offices after the pandemic?

Biometric mass surveillance systems can exacerbate structural inequalities, accelerate unlawful profiling, have a chilling effect on their freedoms of expression and assembly, and put limits on everyone’s ability to participate in public and social activities.

Human rights apply in emergencies and health crises. We don’t have to choose between privacy and health: protecting digital rights also promotes public health. The suspension of data protection rights in Hungary show why the EU needs to step up to protect fundamental rights.

Biometric surveillance – an architecture of oppression

Portrayed as an “architecture of oppression”, the untargeted capture or processing of sensitive biometric data makes it possible for governments and companies to build up incredibly detailed permanent records of who you meet, where you go, and what you do. More, it allows these actors to use all these records against you – whether for law enforcement, public authority or even commercial uses. By linking them to faces and bodies, these permanent records become quite literally carved into your skin. The increased capacity of states to track and identify individuals through facial recognition and other biometric processing is likely to disproportionately impact populations which are already highly policed, surveilled and targeted by abuse, including people of colour, Roma and Muslim communities, social activists, LGBTQ+ people and people with irregular migration status. There can be no place for this in a democratic, rights-based, rule-of-law-respecting society.

The introduction of facial recognition into cities is a radical and dystopic idea which significantly threatens our freedoms and poses fundamental questions about the kind of societies we want to live in. As a highly intrusive surveillance technique, it can provide authorities with new opportunities to undermine democracy under the cloak of defending it. We need to permanently ban its roll out now before it’s too late.

EDRi is therefore calling for an immediate and indefinite ban on biometric mass surveillance across the European Union.

This ban is grounded in the rights and protections enshrined in the Charter of Fundamental Rights of the European Union, the General Data Protection Regulation (GDPR) and the Law Enforcement Directive (LED)
which are currently under the spotlight for their two-year anniversary reviews. Together, these instruments guarantee that the people of the EU can live without fear of arbitrary treatment or abuse of power; with respect for their autonomy and self-development; and in safety and security by setting strong data protection and privacy standards. Biometric mass surveillance constitutes a violation of the essence of these instruments, and a contravention of the very heart of the EU’s fundamental rights.

Once systems are in place that normalise and legitimise the 24/7 watching of everyone, all the time, it’s a slippery slope towards authoritarianism. The EU must ensure, therefore, through legislative and non-legislative means, that biometric mass surveillance is comprehensively banned in law and in practice.

We are shaping the world of tomorrow with the measures we are taking today. It is of utmost importance that we keep this in mind and do not let the COVID-19 crisis scare us in to a (mass) surveillance state. Surveillance is not a medicine.

The EU regulates everything from medicines to children’s toys. It is unimaginable that a drug which has not been shown to be effective, or a toy which poses significant risks to children’s wellbeing, would be allowed onto the market. However, when it comes to biometric data capture and processing, in particular in an untargeted way in public spaces (i.e. mass surveillance), the EU has been a haven for unlawful biometric experimentation and surveillance. This has happened despite the fact that a 2020 study demonstrated that over 80% of Europeans are against sharing their facial data with authorities.

EDRi calls on the EU Commission, European Parliament and Member States to stick to their values and protect our societies by banning biometric mass surveillance. Failing to do so will increase the risks of an uncontrolled and uncontrollable demise into a digital dystopia.

This is not a regular petition, but an official “European Citizens’ Initiative” (ECI) run by EDRi on behalf of the European Commission. This means your signature must be officially verified by national authorities, according to each EU country’s specific rules. We cannot control the data that they require, since it is required by Regulation (EU) 2019/788 on the European citizens’ initiative for the purpose of confirming your signature. We can only use the information that you provide in Step 2 to contact you with updates, if you choose to enter it. Furthermore, our ECI signature collection system has been verified by the German Federal Information Security Office (BSI) to ensure it is compliant with the EU’s Regulation on ECIs. Please see our “Why ECI?” page for further details, and check out our privacy policy.

This ECI is open to all EU citizens, even if you currently live outside the EU (although there are special rules for Germany). Unfortunately if you are not an EU national, the EU’s official rules say that you cannot sign. Check https://reclaimyourface.eu other ways than non-EU citizens can help the cause.

Note to German citizens: It is possible to sign our ECI petition if you live outside the EU, but German rules mean that for German citizens specifically, your signature will only be valid if you are registered with your current permanent residence at the relevant German diplomatic representation. If you are not registered, then unfortunately your signature will not be counted. You can read more information about the rules. This rule does not apply to citizens of any other EU country.

Legally, if we reach 1 million signatures (with minimum thresholds met in at least 7 EU countries) then the European Commission must meet with us to discuss our proposal for a new law. They must then issue a formal communication (a piece of EU soft law) explaining why they are or are not acting on our proposal, and they may also ask the European Parliament to open a debate on the topic. For these reasons, a European Citizens’ Initiative (ECI) is a powerful tool for getting our topic onto the EU agenda and showing wide public support for banning biometric mass surveillance practices.

Emergency responses to COVID-19 must not extend beyond the crisis (15. 04. 2020)
https://edri.org/emergency-responses-to-covid-19-must-not-extend-beyond-the-crisis/