E-evidence and human rights: The Parliament is not quite there yet

The European Parliament Committee on Civil Liberties (LIBE) is currently busy working out a compromise between its different political groups in order to establish a common position on the “e-evidence” Regulation.

The European Parliament Committee on Civil Liberties (LIBE) is currently busy working out a compromise between its different political groups in order to establish a common position on the “e-evidence” Regulation. It is an important step of the legislative process since the Parliament’s position will be the only bulwark standing between the proper protection of human rights in cross-border law enforcement and the Council’s and the Commission’s highly problematic e-evidence ideas. 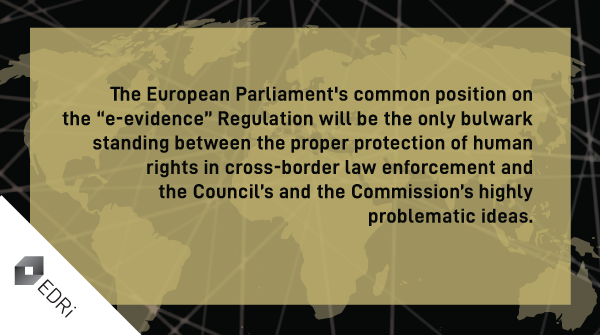 To ensure that fundamental rights are protected when law enforcement authorities in an EU Member State act outside their own country, the Parliament compromise should do the following:

✅ Do: The authority in the executing Member State – and where applicable the affected State – should be obliged to confirm or reject an order before the online service provider can execute it. Some compromises on the table suggest that after a certain period of time (for now, 10 days) without a reaction from the executing authority, the service provider should simply assume green light. This is a risky shortcut because it creates the incentive for an underfunded and understaffed executing authority to ignore requests and let the 10-day deadline pass without action. Given that many service providers are currently based in Ireland, whose law enforcement authorities are disproportionately flooded by these requests, this is a very real scenario which would practically annul many of the otherwise very important human rights safeguards built in by the Member of the European Parliament (MEP) Birgit Sippel, Rapporteur of this file in LIBE Committee. In practice, it would mean that the service providers become the ultimate safety net against abusive requests and fundamental rights breaches. The explicit approval by the executing authority must therefore be mandatory before an order can be executed.

❌ Don’t: Some compromise proposals imply that orders to access subscriber data would have no suspensive effect on the handing out of data. Those proposals assume that – if an order is found invalid at a later state – the data could simply be declared inadmissible in court and be deleted by the issuing authority. In practice, however, this notion is misleading, at best. Once an investigating police officer learns a suspect’s identity, they will not be able to unknow that identity just because the subscriber data they learned it from has been declared inadmissible and is deleted. What is worse, if indeed the knowledge of the identity itself was declared inadmissible, the whole investigation would collapse. In order to ensure legal certainty for investigating officers, again, an order should not be executed without the authorisation of the executing authority. This procedural requirement should apply for all types of data and orders.

✅ Do: Just like the service provider is given the possibility to refuse an order because it is manifestly abusive, the executing authority should be obliged to check that the order is proportionate as part of its refusal grounds checklist.

❌ Don’t: Considering the state of the rule of law in certain EU Member States, executing an order from a State where the independence of the judiciary is not guaranteed would be incredibly risky for the protection of fundamental rights. In line with the jurisprudence of the Court of Justice of the EU on the independence of judicial authorities, any executing authority should refuse to execute orders from States subjected to Article 7 proceedings.

If adopted, these changes would strengthen the Parliament’s Report and ensure it is able to defend citizens’ rights during the e-evidence negotiations with the Commission and the Council.