For the first time this year and with great solemnity, EDRi presents its first annual awards.

1. The “Humpty Dumpty Award” for the most silly “statistics”.

Winner: Deutsche Telekom, for its “One Million Cyber Attacks per day”. This statistic was not plagiarised by any of DT’s employees.

Honourable Mention: TERA for its “study” on losses from IPR infringements.

2. The “WTF award” for the most meaningless amendment.

12. Strongly believes in the principle of an open internet where traffic is treated equally in a non-discriminatory manner; recognises, however, that the increase in the use of the internet, in particular Internet Protocol TV, has put further pressure on service providers to efficiently manage their network capacity using traffic management tools; believes that any further legislation in this area must have consumer protection at its core whilst permitting necessary traffic management and specialised services where they are not materially detrimental to other users, and at the same time endowing authorities with the ability to take action against criminality;

Winner: Eric Schmidt, for his his amazingly ill-infomed advice that people can avoid NSA surveillance by using “incognito” mode in the Google Chrome browser.

4. The “I’ve just shot myself in the foot” award, for the most successful piece of economic self-flagellation

They successfully lobbied to force Google to pay them for driving traffic to publishers’ websites (even if the publishers did not want to impose the charge). Google News then left the Spanish market, leaving the publishers without the readers that would have found their articles through Google News.

Top five digital rights publications of the year (which aren’t really the top five, just the ones we could remember without doing much research… we’re kinda busy):

Issue paper: The rule of law on the Internet and in the wider digital world (pdf).

Report of the Office of the United Nations High Commissioner for Human Rights: The Right to Privacy in the Digital Age (pdf)

5. The Charter of Digital Rights… prepared by… well, us, because well…: 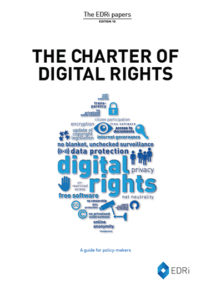