For the first time and with great solemnity, EDRi presents the first ever third edition of its annual awards. 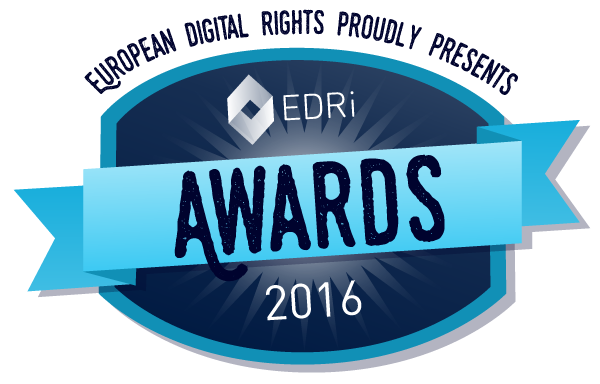 The award goes to the “think tank” European Centre For International Political Economy (ECIPE) for its highly imaginative database on “barriers to trade”. The database includes some items whose validity as a significant barriers to free flow of data is tenuous as best. One example of such “barriers” is France’s rules on data protection by default, which are described as a “bandwitch” (sandwich? banned witch?) and net neutrality restriction. Contrary to what ECIPE suggests, such rules actually serve to increase trust and boost the free flow of data.

The EU’s data protection Directive is counted as eleven barriers to “free flow of data” in the European Union, while the EU’s Copyright Directive, with its well-known long list of options to restrict the free flow of data, is listed as a single barrier. One could almost be left with the impression that citizens’ rights are considered to be more of a barrier than economic rights.

This year’s award goes to Member of the European Parliament (MEP) Axel Voss, for his unintentional opposition to the adoption of the Privacy Shield agreement.

You can still thank him for standing for your rights, whatever his intentions might have been:

In response to German Member of Parliament Andrej Hunko’s parliamentary question (pdf, in German) about a Die Zeit article concerning the deletion of 100 000 messages on Facebook, the response of the German Ministry of Justice was clear – that the German government completely abdicates responsibility:

“The Federal government has no information with regard to the extent to which the deleted contents reported in Die Zeit were illegal. The Federal Government also does not have a list of the 100 000 pieces of internet content. It is therefore impossible to assess, whether associated personal information were subject of a police investigation.

The Taskforce set up by Minister Maas on illegal hate messages on the internet does not check whether individual instances of hate speech are illegal or, in particular, are criminal. It has, since autumn 2015, developed standards for how the participating internet companies can effectively take action against hate messages. The internet companies check and delete, on their own responsibility, the content that is reported to them.” [our translation]

The “Max Schrems” award
Due to the new and pending litigation successes, the 2016 award goes to Les Exégètes amateurs for their success. Special mention goes to Max Schrems, for being the best Max Schrems in Europe, Privacy International and Digital Rights Ireland for their ongoing hard work.

The heroes who keep us energised award
This award is granted to Dunja Mijatovic, Organization for Security and Co-operation in Europe (OSCE) Representative on Freedom of the Media and David Kaye, United Nations (UN) Special Rapporteur on freedom of opinion and expression – for their inspirational energy, wisdom and insight.

Constitutions are chains imposed by Peter when sober on Peter when drunk.