Several tens of thousands of citizens from an estimated 200 cities in Europe
went out in the streets on a cold 11 February 2012, in a massive
pan-european protest against ACTA and to support digital civil rights.
Several EDRI members and observers have reported for the EDRi-gram on what
happened in their countries.

The biggest turnout was in Germany, where 100 000 protesters flooded the
streets to demonstrate against the ACTA agreement. These massive protests in
spite of sub-zero temperature have caught the attention of not only
politicians but also media and the wider public completely by surprise. A
day before, the German government backed down in face of this wave of online
protest and postponed the signing of ACTA until the decision of the European
Parliament. The demonstrations were organized entirely in a decentralized
manner via the Internet. The participants were mostly very young and took
part in a demonstration for the first time. In Berlin 10 000 people took the
streets against ACTA, in Munich even 16 000. Never before have so many
people protested for reforming copyright legislation and against
overshooting surveillance of the digital realm. Because of the protests,
ACTA became the main topic in the news in Germany and has remained so ever
since. For the first time, these protests have ignited a wider debate on how
the outdated copyright law can be adapted to the requirements of the digital
age. Therefore, EDRi-member Digitale Gesellschaft e.V. demanded: “We must
reform copyright but must not cement it with ACTA.”

In the capital of Bulgaria approx 6-8 000 people showed up in one of the
largest demonstration since 1997, shouting slogans against ACTA and for
Internet freedom. In some cases the local police did not allow the
participants in Sofia to wear the Guy Fawkes – or “V” – masks and even asked
for purchase proof for the laptops people brought at the event, to “make
sure they were not stolen”.

Since the Austrian government signed ACTA on 26 January, a broad movement
against the treaty has formed. It consists of activists in and around the
EDRi member VIBE!AT, a group of former Pirate Party members who started
their own initiative (netzfreiheit.org), political parties and
representatives (the Greens, MEP Ehrenhauser and the Pirate Party) and
Anonymous. Together, these different groups have dominated the public
perception of ACTA. The efforts included: concentrated press releases to
push the story out of the tech departments, press conferences held by ACTA
opponents and discussions in independent media formats. The action peaked on
11 February when all over Austria close to 10 000 people took to the streets
to protest against ACTA.

Around 5 000 Romanians gathered in over 20 major cities, most of them
in Cluj-Napoca and Bucharest, to demonstrate against ACTA. They were also
chanting for Internet freedom and against surveillance. There are several
national online petitions gathering more than 40 000 signatures asking for
ACTA not to be ratified by the European Parliament or the national
Parliament.

After the publication of the information that the Czech Republic had signed
ACTA, EDRi-member Iuridicum Remedium published a Czech translation of the
campaign “Call your MPs” (EDRi). The media began to seriously inform about
ACTA and the first debate about the agreement was held on 2 February. On 6
February the Czech government office issued a statement that the Czech
Republic had stopped the ratification of ACTA, but that didn’t stop several
Czech cities to join the demonstration against ACTA on 11 February 2012.

Close to a thousand Hungarians gathered in Budapest for the the nation’s
first ACTA protest, with smaller rallies also held in Székesféhervár,
Szeged and Pécs. The demonstrations were organized by the Hungarian
Anonymous Group, Occupy Budapest and the Pirate Party movement.

In Finland about 400 people attended the anti-ACTA demonstration on 11
February in the streets of Helsinki. The demonstrations helped raise
media attention, especially because earlier coverage on ACTA was very
low. The Finnish Parliament is expected to discuss ACTA in Autumn 2012.

Protesters also demonstrated against ACTA in The Netherlands. People in
various cities, including Amsterdam and Rotterdam, faced the cold and
expressed their discontent with ACTA. In Amsterdam some 250 people gathered
in Dam Square where there were some improvised speeches. MEP Marietje
Schaake visited the demonstration. Halfway in the afternoon, about half of
the demonstrators made an improvised march through the city.

In Brussels, around 300 people protested in the city centre shouting slogans
against ACTA and rolling out a huge banner: “ACTA: Sharing culture is a now
crime – Thank you EU!” Participants included local politicians,
representatives from several Belgian NGOs (such as Constant, datapanik and
Nurpa), international NGO AccessNow.org, press people and many Anonymous
masks.

Around 500 protesters also gathered in central London outside the offices of
rights holder representative groups to protest against ACTA.

There are several online petitions against ACTA gathering milllions of signatures. The Access global petition has almost 400 000 and
the Avaaz petition has over 2 million signatures already. 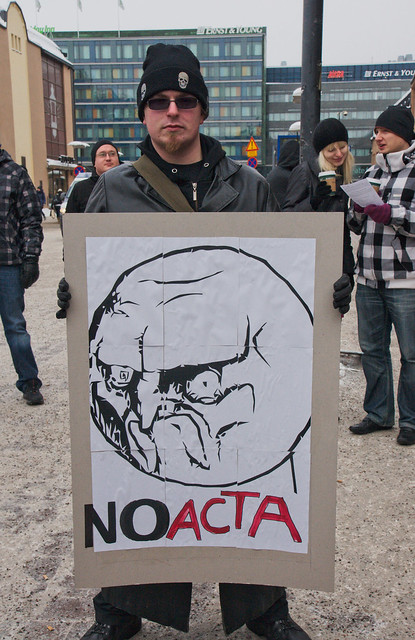 Global petition against ACTA and map of protests
https://www.accessnow.org/policy-activism/press-blog/acta-protest-feb-11

Aaavaz Petition: ACTA: The new threat to the net
https://secure.avaaz.org/en/eu_save_the_internet_spread/