Last April, EDRi, supported by other sixty-five NGOs from the European Union, North, Central and South America, Africa, Asia and Australia sent a letter (PDF) to the European Commission. The letter asked if the Commission would respect the “absolute red line” that the protection levels in the 1995 Data Protection Directive would be maintained.

This commitment is now critically important, as the EU institutions are currently involved in “trialogue discussions” (infographic), which are expected to finalise the data protection reform process started five years ago with a Commission Communication. A clear position from the leadership of the Commission on the protection of existing standards is crucial to ensure that some of the more extremist policies (PDF) proposed by some Member States can be definitively taken off the table, for the benefit of the coherence, trust and credibility that all stakeholders need from the final Regulation and Directive.

Today, we received a positive answer (PDF) from the European Commission, confirming that they will respect the commitment to respect the levels protection set in the Directive 95/46/EC:

The Commission has been and will continue to be true to this commitment.

Ahead of the next trialogue meetings starting again in September, this commitment sets important boundaries on what is, and what is not, acceptable as this process moves forwards.

All actors involved in these negotiations need not to be distracted with siren calls from a small number of private actors who, as they historically always do, mistake good regulation for constraints on business. As Paul Nemitz, Director for Fundamental rights and Union citizenship in the Directorate – General for Justice of the European Commission, explained to the Wall Street Journal: “The path toward trust through high levels of protection is good for the economy, good for growth and employment.” 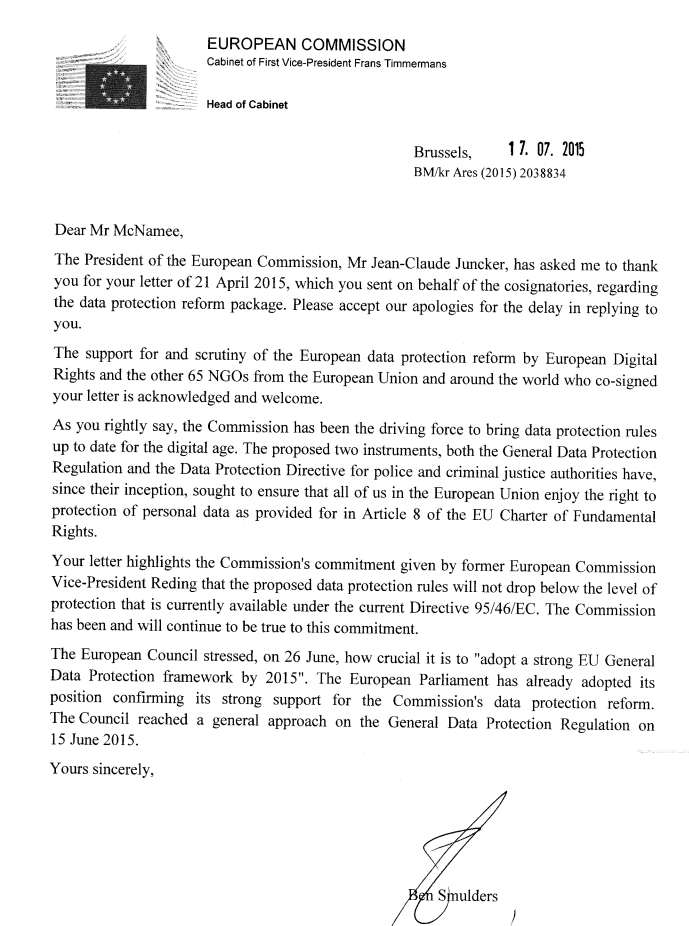