Today, on 28 November 2016, European Digital Rights (EDRi) co-signed a statement together with over 450 civil society organisations. In the statement, civil society from both Europe and Canada express concerns about the Comprehensive Economic and Trade Agreement (CETA) and therefore call for its rejection. CETA should be renegotiated, but for that to happen, there must be political will to do so. 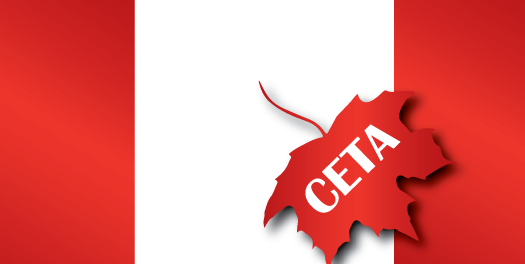 You can read the statement below. The statement is also available in Czech, French, German, Italian, Spanish, Catalan, Polish and Romanian:

We, the undersigned civil society organisations from Canada and Europe, hereby express our deep concern about the Comprehensive Economic and Trade Agreement (CETA) between the EU and Canada. During the long process of the deal’s negotiations and legal check, we repeatedly pointed out major problems with the CETA text. We provided concrete inputs, which could have triggered a shift towards a more transparent and democratic trade policy with the protection of the environment and people’s fundamental rights at its core. But our concerns have not been addressed in the CETA as signed in October 2016. This is why we are stating our firm opposition to the ratification of the agreement.

Our objections are shared by a growing number of citizens on both sides of the Atlantic. A record 3.5 million people from all over Europe have signed a petition against CETA and its twin agreement, the EU-US Transatlantic Trade and Investment Partnership.[i] Over 2,100 local and regional governments have declared themselves TTIP- and CETA-free.[ii] Constitutional challenges against CETA have been filed in Germany[iii] and Canada [iv] and the legality of CETA’s controversial privileges for foreign investors will likely be ruled on by the Court of Justice of the European Union.[v]

On both sides of the Atlantic, farmers, trade unions, public health, consumer, environmental and digital rights groups, other NGOs, as well as small and medium-sized enterprises (SMEs) have rejected the agreement.[vi] In October 2016, concerns in four sub-federal Belgian governments about the agreement’s negative impacts, and, in particular, its dangerous “investment court system”, nearly stopped their federal government from signing CETA.

Despite the controversy, the Canadian government and the EU institutions are trying to expedite CETA’s ratification. In Canada, legislation that would bring the agreement into force has already been introduced, without allowing time for any public consultation on the final agreement. The European Parliament also seems set to cut short its internal consultation processes, thereby limiting debate over ratifying the 1,600-page-long CETA text. After that, large parts of the agreement would be brought into force provisionally – long before the parliaments of all 28 EU member states have had their say.

To gain support for CETA ratification and allay concerns, numerous declarations have been attached to the text in the past months. But not a letter of the CETA text has been changed since its final version was published in early 2016. And the accompanying statements, including an EU-Canada “Joint Interpretative Instrument”, do nothing to fix the problems arising from the problematic CETA text, as experts have demonstrated.[vii]

We wish to highlight some of our fundamental concerns about the agreement as signed:

CETA is the result of a largely secret negotiation process between the previous Canadian government and the previous European Commission. The final CETA text and accompanying declarations ignore almost all of the reasonable and very specific amendments proposed by civil society [xviii] to address the flaws of the agreement. The most recent attempts to re-open the negotiations, by the government of the Walloon region in Belgium, were blocked. Now, only a ‘take it or leave it’, yes or no vote on the 1,600-page agreement is possible.

As it stands, CETA is not a progressive trade deal. It would be a mistake to adopt this treaty with its many worrying provisions as a model for agreements to come. CETA is a backward-looking and even more intrusive version of the old free trade agenda designed by and for the world’s largest multinationals. We need a paradigm shift toward a transparent and inclusive trade policy founded on the needs of people and our planet. Ratifying CETA will take us many steps further away from this much needed change.

[i] Interactive map of the European initiative against TTIP and CETA

[iv] Constitutional challenge against CETA at the Federal Court of Canada

[v] See, for example: Investment Court System in CETA to be judged by the ECJ

[vii] See, for example: The Great CETA swindle; The EU-Canada Joint Interpretive Declaration/Instrument on the CETA; CETA to be signed unchanged, but less likely to be ratified after Wallonian resistance

[ix] See, for example: The Zombie ISDS. Rebranded as ICS, rights for corporations to sue states refuse to die

[xii] CETA without blinders: how cutting ‘trade costs and more’ will cause unemployment, inequality and welfare losses

[xiii] See, for example: “The financial services chapter: Inflating bank profits at the expense of citizens”, in Making sense of CETA

[xv] See, for example: “Limiting how and what government regulates” and “More cooperation for less regulation”, in Making sense of CETA; and CIEL letter to Minister-President Magnette

[xviii] For examples of specific amendments put forward by trade unions and environmental organisations, see: Protocol on Dispute Settlement and Institutional Mechanisms for the trade and sustainable development and trade and labour provisions; Understanding on the Provision of Public Services and Procurement; Protocol on Investment Protection; Understanding on the Precautionary Principle; BUND proposals for amendments on public services, the precautionary principle and the promotion of renewable energy.