How it started, how it’s going: Halfway through the current European Commission’s legislative term

In January 2022, EDRi held a panel at its annual flagship event Privacy Camp to discuss the EU’s current legislative term and what to expect by the next EU elections in terms of digital rights.

The session offered a space to reflect on the advancement of digital rights and the challenges being faced. This discussion was the first step in EDRi’s internal reflection on the impact it has had on digital rights advocacy, enabling strategically discussions about the upcoming priorities for the EDRi network in the next legislative term. 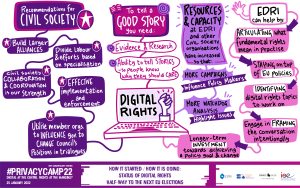 The Privacy Camp panelists for this session were Member of the European Parliament (MEP) Alexandra Geese, Asha Allen, Advocacy Director for Europe at the Center for Democracy and Technology (CDT), Joris van Hoboken, Professor of Law at the Vrije Universiteit Brussels (VUB) & a Senior Researcher at the Institute for Information Law (IviR) and Anna Fielder, EDRi President and Senior Policy Adviser and Chair Emerita of Privacy International.

In her reflection of how civil society engages with key stakeholders and contributes to the legislative processes, Ms. Geese suggested that rather than civil society commenting on every single amendment, NGOs should focus on building larger and stronger alliances instead, ensuring that efforts and capacity are distributed based on specialisation and expertise. Additionally, she underlined that it is vital that NGOs with national membership engage with national ministries to ensure that fundamental rights protections are part of the final text coming out of the trilogues.She also suggested that civil society should focus on finding impactful stories which translate abstract policy amendments into relatable examples of what these policies means to individuals and how it impacts their daily experiences. Finally, she raised the dilemma between everyone posting whatever they want and ensuring that no one is left behind.

The question of how to achieve this in the context of the Digital Services Act (DSA) as well as other related legislation encouraged the panel to think of the impact of the “tsunami of digital legislation”. Reflecting on how policy could be made more people-focused, Asha Allen suggested that in order to ensure that everyone’s fundamental rights are respected in EU laws, especially those of marginalised communities that are the most affected by the misuse of technologies., more intersectional methods must be undertaken in decision-making. The call from Ms. Geese to ensure that privacy is considered not only at the individual level, but also as a collective protection of democracy, also falls within this demand to be more people-focused.

Joris van Hoboken said that “the digital transformation presents the EU with some constitutional opportunities to re-articulate itself” and that digital rights have become central to regulatory projects. In his opinion, the role of civil society should be to articulate what those fundamental rights mean in practice, paying more attention to the politics of those rights in the European context. When discussing the DSA in particular, he said that it will have a major impact on how the internet works as it will bring new obligations for platforms as well as public and regulatory oversight. However, he emphasised that it was important that people with specific expertise are put in the monitoring roles of supervisory authorities to guarantee that the implementation of the legislation work as intended.

Last but not least, EDRi’s President Anna Fielder added that EDRi could support civil society efforts of pushing digital rights related legislations to prioritise people’s human rights by identifying what this means in practice, staying on top of EU policies, selecting digital rights topics to work on, engaging in framing the conversation intentionally and ensuring longer-term investment towards achieving a policy goal and change. She also suggested that EDRi could become a watchdog in addition to its currently advocacy and campaigns focused role and called for stronger engagement with non-EDRi members in the European Union and more proactive efforts to build coalitions and partnerships outside Europe.

As next steps, EDRi will start discussing the implementation of its strategy and thinking about the mid- and long-term opportunities and threats regarding human rights in the digital age in Europe and beyond.

Do you want to help us build a people-centered, democratic society? Donate to EDRi to provide us with stable funding to advocate for robust laws, mobilise people, promote a healthy and accountable technology market, and build a movement committed to digital rights in a connected world.