From Wired to the New York Times, every news platform has been reporting about the massive lobbying efforts against the data protection reform over the past few months. Vice-President of the EU Commission Viviane Reding has stated in the Telegraph that the proposed rules were subject to the most aggressive lobbying she has ever witnessed. Many of these corporate lobbying efforts in Brussels do not simply wish to prevent better data protection rules but rather to weaken already existing standards.

The extent to which industry lobbying is falling on good soil at the Parliament has now been revealed by the initiative Europe vs Facebook. The first Committee opinion (pdf) adopted in the European Parliament is a long list (pdf) of examples of “copy and paste” adoption of proposals from lobbying documents. More information will be soon available on the portal lobbyplag.eu which is collecting text that has been copied & pasted into European legislation.

Parliamentarians in the Internal Market and Consumer Committee (IMCO) have adopted amendments written by Amazon, eBay or the American Chamber of Commerce (AmCham EU) – to the detriment of European citizens and their fundamental rights to privacy and data protection. It has become clear that corporate lobbying is currently replacing European citizens’ voices and manifest concerns.

Here are some examples of the lobbying papers that were copied into the EU Parliament’s opinion: 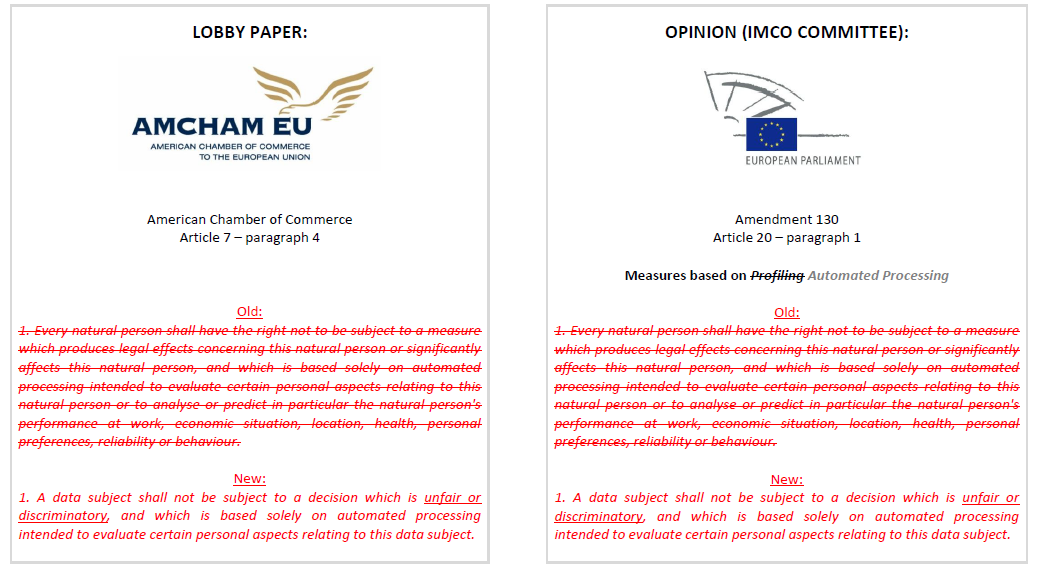 “Three for the price of one” lobbying

Many of the largest companies are undertaking a lot of lobbying in their own name, which is what one would expect. However, they are also mobilising their trade associations in order to spread the same message again. Then, as we see with the ironically-named Industry Coalition for Data Protection (pdf), they are making associations of their associations, in order to repeat the same message yet again. One group of companies, three sets of messages.