This is the sixth article of the series “EDRi member in the Spotlight” in which our members have the opportunity to introduce themselves and their work in depth.

We are epicenter.works (formerly AKVorrat.at – Arbeitskreis Vorratsdaten Österreich, Working Group on Data Retention) from Austria, a non-profit organisation committed to the preservation of fundamental rights in the digital age and a pluralistic society.

In the course of taking action against the data retention law in Austria, a group of lawyers, technicians and concerned citizens founded our NGO. We organised one of the most successful citizens’ initiatives in Austria, collecting 106 067 signatures, and successfully contested the national implementation of the Data Retention Directive before the Austrian Constitutional Court (VfGH), supported by 11 167 plaintiffs. Combined with an Irish case, our complaint lead to the complete annulment of this Directive by the Court of Justice of the European Union (CJEU) in April 2014. Because of the massive support from civil society in this case, AKVorrat decided to continue its work of defending civil rights in the digital age. For more than two years, we have been operating a back office with a small number of employees, but our work would not be possible without the many helping hands and volunteers who support us. 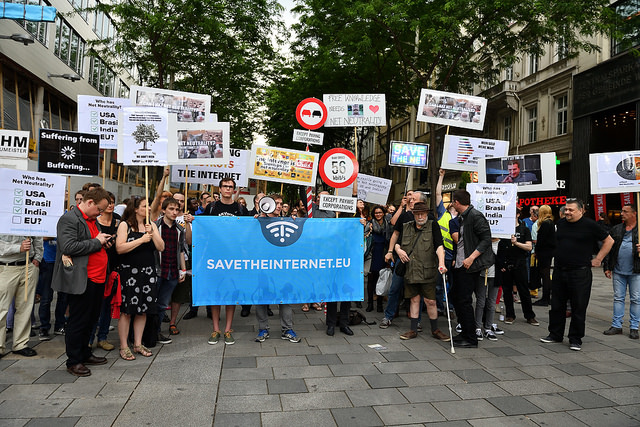 … global access to information and the chance to build networks of like-minded people around the globe. Additionally, ICT has the potential to enhance citizen participation, transparency and the democratic accountability of policy and decision-making.

… a whole new approach to mass surveillance, and the possibilities it offers for repression of entire sections of society as well as individual critical minds. History shows that surveillance technologies carry the potential to be misused not only by autocratic governments, but also by democratic states that generally abide the rule of law.

Our most important success, benefitting all citizens of the European Union, was the annulment of the Data Retention Directive (2006/24/EC) by the CJEU in 2014, in a joined case with EDRi member Digital Rights Ireland. We are also proud of our leading involvement in the savetheinternet.eu campaign, fighting for strong net neutrality rules in Europe.

We would introduce a mandatory impact assessment of new surveillance measures before their implementation in law. This assessment is necessary in order to safeguard our fundamental rights and return security policy back to what is factual and effective.

In January 2017, the Austrian government published an updated working program which introduces a whole new set of surveillance measures. These measures range from comprehensive, networked camera surveillance with real-time picture streaming, government malware to monitor encrypted communication, and a new attempt at introducing telecoms data retention, to mandatory registration of prepaid SIM cards, and monitoring of vehicle number plates. The laws implementing these measures are likely to be adopted by the end of 2017, and we are currently running a nationwide campaign to educate citizens on the proposed measures and to convince politicians to respect citizens’ fundamental rights.

You can reach us via e-mail, Twitter and Facebook, visit our website, and check out the website of our campaign to prevent a whole new bundle of surveillance measures proposed by the Austrian government.

Stoppt Das Überwachungspaket! – Campaign website against the surveillance measures proposed by the Austrian Government (only in German)
https://xn--berwachungspaket-izb.at/

Member in the spotlight series
https://edri.org/our-work/member-in-the-spotlight-series/