Net neutrality in critical danger in Europe. The time to act is NOW!

The new proposal is another major concession from the Parliament. It contains only the absolute minimum elements for net neutrality, while proposing incoherent, meaningless text on blocking of allegedly illegal content, and dangerous suggestions on “parental controls” (filtering of legal content).

The new compromise represents another surrender from the European Parliament, which continues to offer concessions to the Council, which continues to offer absolutely nothing in return. Everything appears to be building to the “end game”, where telecoms providers will be allowed to launch a new abuse (the end of net neutrality) in return for the end of an old abuse (mobile roaming charges).

So, what is the “score” in the negotiations so far?

What has the Parliament given up?

What has the Council given up?
Almost nothing, as all the Council’s proposals were virtually identical. Modifications made in the most recent texts went even further away the Parliament’s position and even worse than the Council’s initial position of 4 March 2015 in certain points.

What to do now?
Visit the SaveTheInternet.eu campaign site. Through SaveTheInternet.eu, anyone can contact her/his representative in the Industry committee of the European Parliament (ITRE) via phone, e-mail or social-media for free!

Technical meetings amongst the three institutions are scheduled for this week.
Contact your MEP: SaveTheInternet.eu and remind him/her the four steps towards ensuring net neutrality: 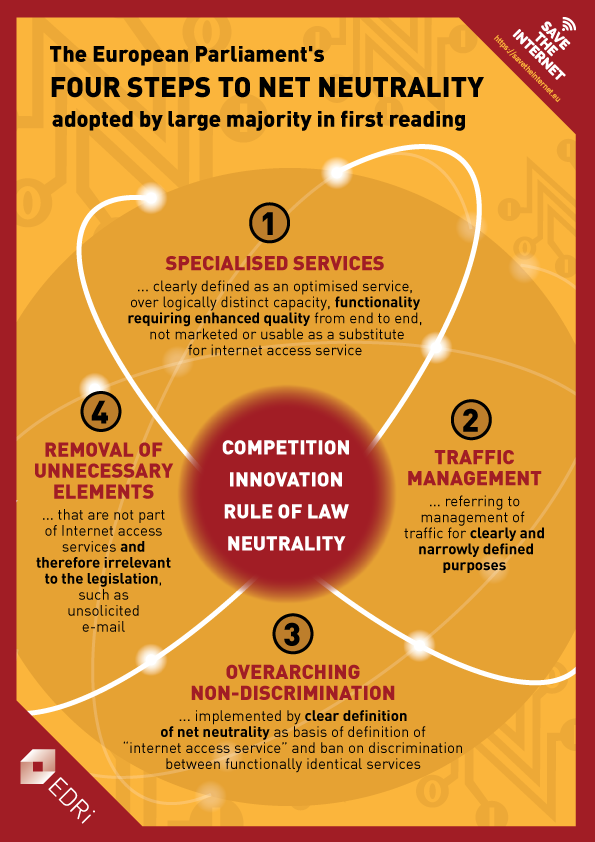