Today, EDRi together with several NGOs, consumer groups and industry representatives sent an open letter to the Council of the European Union, calling for Telecoms ministers to support strong net neutrality rules in the EU. The Council is currently reviewing the proposal of the Telecoms Single Market Regulation, voted on by the European Parliament in April.

The European Parliament took a major step to protecting the open internet in Europe and to setting a global standard for online freedoms. Despite fierce lobbying from a coalition of the European Commission and former monopoly telecoms operators, Parliamentarians have supported the principle that the internet should remain open, competitive and democratic. It is now up to the Member States in the Council to confirm Europe’s support for a free and open Internet. 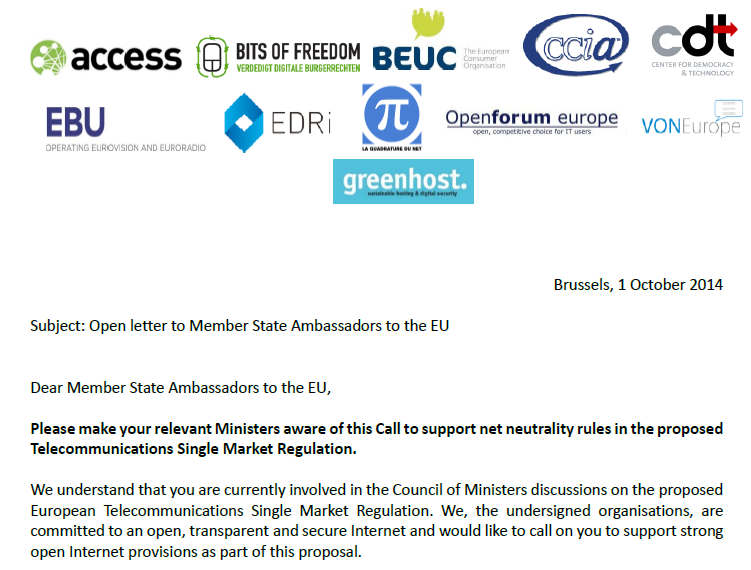 The full letter and list of signatories can be found here (pdf) and below:

We understand that you are currently involved in the Council of Ministers discussions on the proposed European Telecommunications Single Market Regulation. We, the undersigned organisations, are committed to an open, transparent and secure Internet and would like to call on you to support strong open Internet provisions as part of this proposal.

The open nature of the Internet is a key driver for innovation and economic efficiency and for fostering informed citizenship and plurality of opinions, creating a vital need for effective rules on net neutrality at EU level. Providing a clear EU regulatory framework on net neutrality would bring much needed certainty for sustained investment in innovative online content and applications that are available to everyone equally and boost consumers’ trust in the Internet and the digital society.

Net neutrality allows consumers and citizens across Europe to enjoy unfettered access to the Internet, regardless of the content, services and applications they use. This principle enables everyone, including innovators and entrepreneurs, to communicate with everyone, both in Europe and globally. Net neutrality is indispensable for innovation and growth, for the fundamental right to receive and impart information and for investment in next generation broadband.

We now call on the Council to take a strong stance on net neutrality.

Such rules should not prevent Internet access providers from offering “specialised services” if they wish, as long as they do not degrade or impair internet access services and are not discriminatory. National regulators must have both effective tools and clear obligations to prevent this from happening and should analyse and address each case on its merits.

EU-wide rules that include these principles will ensure that users, not Internet access providers, decide what applications and content they use, and enable entrepreneurs to market their services across the Union. It will be a significant step towards a true digital single market and avoid individual countries adopting different, perhaps incompatible legislation. Finally, it will demonstrate a commitment by Member States to respond to the demands of citizens, the European Parliament, and businesses across Europe.

The upcoming negotiations between Telecoms Ministers are an opportunity to send a clear signal to the other EU institutions and the European public that there is a political will to establish an EU framework which enables the EU to take up its role as a champion of the open Internet. We therefore call upon you to work towards the inclusion of robust net neutrality provisions in the Telecommunications Single Market Regulation proposal which would provide certainty for providers of innovative online content, applications and services, enhance transparency for end-users, and boost consumers trust in the Internet.

The contributors of this open letter are: