The letter was sent to the key MEPs concerned with the interinstitutional negotiations to review of the EU Transparency Register. This letter is important as big business lobbying practices are having an undue influence over EU policy-makers. If we want digital rights and citizens’ interests to be respected, lobbying needs to be strictly regulated.

In the letter, we ask: 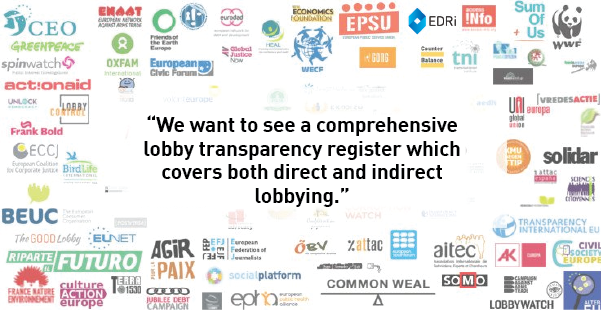 You can read the letter below or here (pdf):

Lobby transparency is an important tool in the fight for public interest decision-making at the European level. We want to see a comprehensive lobby transparency register which covers both direct and indirect lobbying, and that can tell us accurately who is influencing EU decision-making, on which issues, on whose behalf, and with what budgets. This should be the ultimate goal of these negotiations.

In particular, we hope that you will prioritise the following demands:

1. A commitment that MEPs should only meet with registered lobbyists

Building on the recent vote on MEP Corbett’s Rules of Procedures report in which MEPs agreed to only meet with registered lobbyists, it will be imperative that the Parliament concretises this commitment within the new lobby register. Such a rule would not affect MEPs who meet with citizens from their constituencies, local civic associations or small-scale entrepreneurs; in fact we welcome contact between MEPs and their constituents. None of these groups would need to join the register unless they met a minimum threshold requirement for lobbying activity. But this rule would greatly enhance the current voluntary register, by narrowing opportunities for lobbying by unregistered organisations, and will greatly encourage the Commission to extend its own ban on meeting unregistered lobbyists to a far greater number of officials.

2. A commitment to provide more resources to the register secretariat

In 2015, Transparency International estimated that over half the entries in the EU lobby register contained factual errors or implausible numbers. All institutions, including the Parliament, should urgently devote new resources to the register secretariat to improve the quality of the data, so as to be able to perform a far greater number of checks on declarations each year.

3. Retaining the current definition of lobbying which includes both direct and indirect lobbying

We are very concerned about the Commission’s proposal to weaken the definition of lobbying in the transparency register which seeks to limit it to only direct interactions with decision-makers. We feel it is essential to explicitly retain the current definition of lobbying which covers all activities which have the objective of directly or indirectly influencing EU policy-making and decision-making. This will ensure a far greater set of activities are covered by the financial disclosure rules of the register, including the indirect lobbying work performed by many ‘intermediaries’ such as lobby consultancies.

4. A commitment to a legally-binding lobby register in the long-term

A lobby register which is no longer voluntary, but is instead backed by the force of law, is essential if all lobbyists are to sign-up, while the possibility of fines or prosecutions will help ensure that more accurate data is provided. The Commission’s proposal makes no progress towards this goal and we urge the Parliament to remain firm in its support for a legally-binding lobby register (as backed by plenary votes in 2014, 2011 and 2008).

We believe that the European Parliament must seize the opportunity presented by this interinstitutional agreement process to demand a far more effective lobby register. Such a register should be the first, essential step in a much longer process to make EU policy-making far more transparent, tackle excessive corporate influence, and bring the EU institutions closer to citizens.

Please get in touch if you have any questions or would like to discuss any of these issues.