In August, La Quadrature du Net (LQDN) filed a complaint before the Conseil d’État (France’s highest administrative court) against provisions of the French code of criminal procedure which authorise the use of facial recognition to identify people registered in a criminal record police file – called “TAJ” for “Traitement des antécédents judiciaires” – by the police. 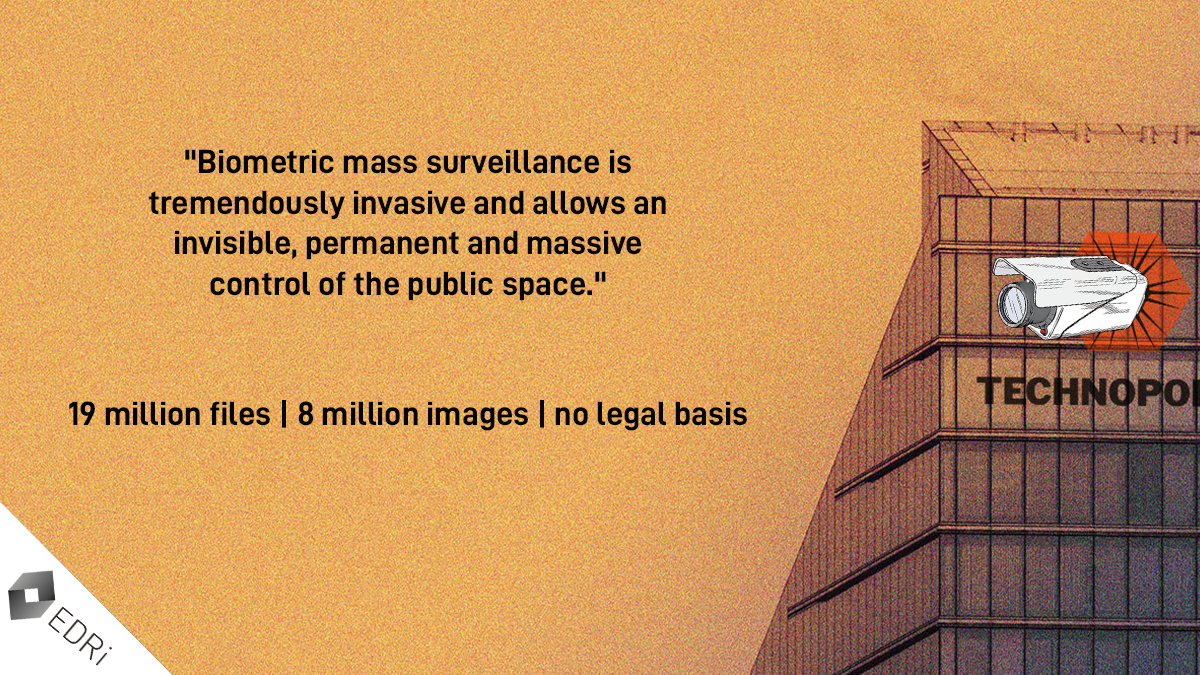 This database contains 19 million files and more than 8 million images of people. Thanks to this database, the French police has been routinely using facial recognition on the streets for many years, with no justification, nor legal framework. It is now time to end this practice.

LQDN already addressed this issue last year: the French government is now trying to convince us that a national public debate on facial recognition is necessary. Yet facial recognition has already been well established in France: the city of Nice for example experimented with a facial recognition program on its streets last year. In French train stations and airports, automated entry gates called “Parafe” are already in use with facial recognition. And it will be the cornerstone of the new digital identity program called “Alicem”.

This issue is even more visible with the TAJ criminal database. This file contains, besides an overwhelming amount of information, images of people “involved” in a police investigations: convicted as well as acquitted individuals.

According to a report from the French Parliament and the French data protection authority (the CNIL), 19 million files and 8 millions images are saved in this database.

Article R40-26 of the Code of Criminal Procedure explicitly allows the police and the military to use facial recognition on these millions of images despite violating European data protection rules. As the CNIL explained in 2011, this system makes it possible “to compare the images of the faces of people involved in the perpetration of offenses captured via CCTV devices with the photographs stored in the database”, for example by comparing the face of a person filmed in the street by a camera with the photographs stored in the police databases in order to identify them. These techniques are already used in current criminal affairs. Recently with the Covid lock-down, strong suspicions of misappropriation of this database to levy fines against “people known to the police” have come to light.

Furthermore, the creation of a database for French biometric ID (called “Fichier TES”) increases this threat to privacy. This new TES database, for which access is widely granted to French law enforcement under the Intelligence Act, will collect the entirety of France’s citizens’ ID cards and passport pictures. This development could allow the police to move even further in its use of facial recognition, and lead to unhampered biometric massive surveillance on a national level. A detailed analysis is available here (in French).

The need for litigation

Biometric mass surveillance is tremendously invasive and inhumane. It allows an invisible, permanent and massive control of the public space. It makes everybody a suspect. It turns our face into a tracking device, rather than a signifier of personality, eventually reducing it to a technical object. It enables invisible control. It establishes a permanent and inescapable identification regime. It eliminates anonymity. That is why, today, we challenge these provisions of the criminal procedure code on the TAJ file : to put an end to biometric mass surveillance.

Just as LQDN challenged (and defeated) facial recognition gates in high schools in the south of France, the Alicem mobile application, automated CCTV in Marseille and with the support of hundreds of French associations asked for a ban of facial recognition, so too shall they continue fighting.

They based their legal complaint on the notion of “strict necessity” which is at the very heart of the 2016/680 European Directive. Article 10 of this Directive states that every biometric data used (face included) for identification is only possible “where strictly necessary” and “subject to appropriate safeguards for the rights and freedoms of the data subject”.

However, this is obviously not the case for the TAJ database: there is no “strict necessity” that can justify such surveillance. On the contrary, the French Justice minister states that this database is just a “technical support” (worlds apart from “strict necessity”). Moreover, there are no “appropriate safeguards” for this use of facial recognition. The use of facial recognition from the TAJ images is a clear breach of European law and the French law which has transposed these different principles.

Facial recognition in the TAJ file is one of the state’s spearheading efforts for enforcing biometric surveillance throughout France. This is the reason that LQDN is challenging it. LQDN will continue to denounce and challenge any kind of surveillance: not only facial and other biometric recognition but all surveillance tech that continue to spread and enhance the Technopolice.