Our overview of the Digital Single Market Communication

The European Commission’s launch of its Digital Single Market Strategy is undoubtedly a positive step, but is plagued with ambiguities, contradictions and an overall lack of leadership on key issues.

For too long, we have found ourselves in the ridiculous situation in which “progress” has meant new technologies complicating tasks that were once easy – such as selling or lending books – and in which European citizens and businesses have been tripping over the million-plus options for the national implementation of copyright laws, while internet users have been frustrated by the line, “not available in your country”.

The new structure of the European Commission is an encouraging start, as it allows a level of coordination and accountability that was previously impossible. Take internet service provider liability and voluntary law enforcement measures, for example. This was previously the responsibility of the Home Affairs, Internal Market, Communications Networks, Content and Technology, Trade and Consumer Directorates, as well as the Secretariat General of the Commission, each acting independently. Now, Commission Vice-President Andrus Ansip leads the Digital Single Market project as a team, providing accountability and structure.

If a Commission is going to act boldly and ambitiously, it must do so from the start of its mandate. And while the Commission is completely correct about the need to engender trust in the online space, the Strategy’s attempts to accommodate all the demands of all lobbyist groups has led to policies which will fail to achieve this trust, and show its willingness to be pushed off track.

The most serious example is the approach to online intermediaries. Responding to pressure from telecoms operators, the Strategy expresses concern that intermediaries are too powerful. The argument is not without merit except, in the very next section, the Commission argues, in response to pressure from copyright holders, that online intermediaries should be given more power, in order to undertake ad hoc policing activities. In the absence of any analytical information showing that this would be necessary, useful or legal, the Strategy’s accompanying “evidence” document descends into chaos, confusing unauthorised online content, illegal online content and legal but potentially harmful content, treating all as one issue. The dangers of this unsophisticated approach are very clear.

The same lobbying damage can be found in the proposals on personal data. While producing typically ambitious figures about the economic value of “big data”, the Strategy offers no strengthening of the e-Privacy Directive, no explanation for the lack of progress on the proposed Directive on protecting personal data being processed for law enforcement purposes, and no leadership on the proposed General Data Protection Regulation.

It is also worth noting the “once only” approach to e-government, designed to increase efficiency in public administrations by not asking users to submit the same information more than once. In practice this means that personal data will flow around government departments, and potentially across borders, reducing citizens’ control over their personal data. Cost efficient solutions that also develop trust can be designed and implemented, but only when privacy by design and default are priorities, not afterthoughts.

There are numerous positive aspects of the Digital Single Market Strategy. Its very existence is a recognition of the problems, and it has identified key issues central to the creation of a Digital Single Market that would benefit citizens and businesses alike. However, it is important for policymakers to remember that the lack of progress over the past ten years is not an inexplicable anomaly – it comes from a lack of leadership and heavy pressure from vested interests that stand to profit from inertia. If the Commission can understand these issues and show leadership and vision, the Digital Single Market can be a huge success. It is time to hoist the sails, re-set the rudder and set a course for a unified digital Europe. 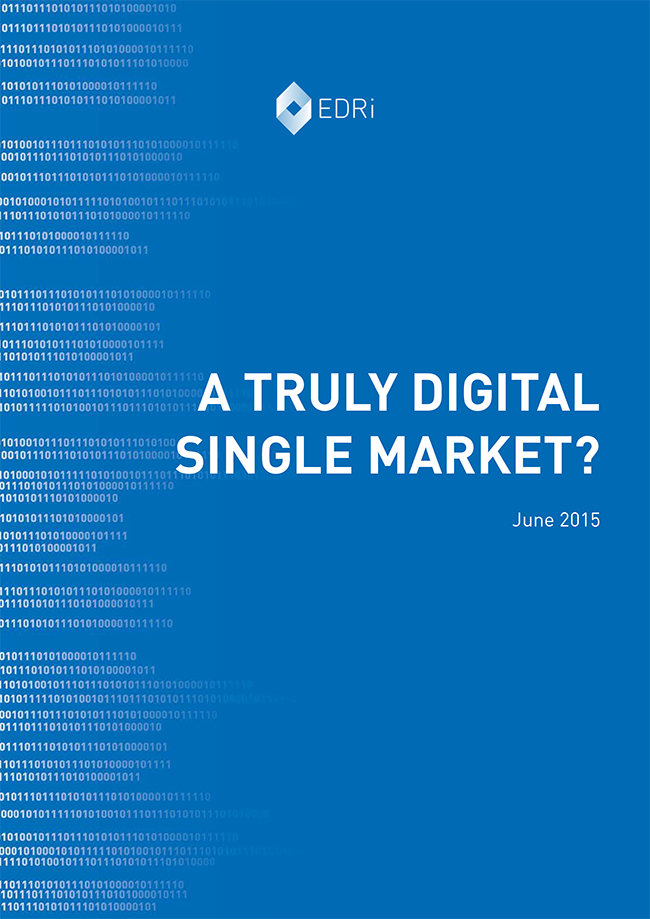