Plans hatched by Europol and Frontex to develop a “European System for Traveller Screening” that would require massive data processing and automated profiling have been condemned as ushering in “a future with even more surveillance” by German left MEP Cornelia Ernst, who told Statewatch that “the daily lives of millions of people” should not be shaped by “agencies that long ceased to be controllable by the public and the parliament.” 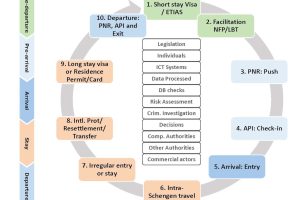 Ernst is a member of German party Die Linke (The Left) and the European Parliament group with the same name, and submitted questions to Europol and Frontex at the end of May on the work of the ‘Future Group on Travel Intelligence and Border Management’, which was established by the two agencies in 2019.

The Future Group’s final report has not been made public, but was published by Statewatch in mid-May. It argues that:

“Border management should also rely on automated targeting or screening systems for performing risk management on the travellers with advance information… The experiences of border authorities outside the EU have demonstrated the operational added value of this. This would require legislative changes and most likely the use of AI to combine those sources effectively.”

However, the answers stress that “participants [were] not formally representing their competent authority,” and that they were “selected as subject-matter experts, while seeking a balanced representation of the various professional disciplines.”

Officials from intelligence agencies may also have taken part in the meetings, although the answer given on this point is rather cryptic:

With the final report published, “the group can be considered as dissolved,” according to one of Europol’s responses, although both Europol and Frontex consider that it has laid the foundations for the long-term transformation of border control: “the work of the Group constitutes a comprehensive study material for the next decade at least, to propose improvements in relation to the future of Travel Intel and external border management,” says the policing agency’s answer.

Ernst, who is also a member of the European Parliament’s civil liberties committee (LIBE), said to Statewatch that “the EU has used various databases to build up a rampant surveillance system that mainly concerns migrants. Europol and Frontex have too much competences and powers, that is why we have also opposed the renewal of their respective regulations in 2022 and 2019, unfortunately unsuccessfully.”

With the Future Group dissolved, Europol now plans “to share and disseminate the findings of the Group and explain the possibilities and lessons learned to all stakeholders (MS, Schengen Associated Countries, third parties, Academia, and private subjects),” the answer also notes.

This would undoubtedly help to lay the groundwork for the future legal changes required by the plan for a ‘European System for Traveller Screening’, and a presentation obtained by Statewatch (pdf) outlines some of the venues for that dissemination.

Under the heading ‘Knowledge Sharing and Promotion of the Final Report’, the document lists “Presentation to IWG on PNR” (an informal Council body on travel surveillance in which Europol outlined its intentions with regard to “travel intelligence” some years ago); “Info Sessions and Work Shops for the PIU Community”; and “The Future of ETIAS [the European Travel Information and Authorisation System] @Europol”.

Along with the Visa Information System (VIS), the ETIAS will use automated profiling tools based on various “risk indicators” to judge how closely the authorities should scrutinise a person’s request to be allowed to travel to the EU. Europol will be responsible for managing the ETIAS “watchlist”, which will be used to store information on individuals suspected of or known to be involved in terrorism or other serious crimes.

The final report of the Future Group includes both the ETIAS and VIS in its schema for a mass profiling system, noting that: “The ETIAS and also the proposed VIS revision represent an interesting test case on how the decision-making process is to be shaped or reviewed (for Schengen visa processing) in the light of interoperability [between different databases].”

The article was first published by Statewatch here.