The rights of Romani people should be an important topic for anyone that cares about digital rights. In this blog, hear from experts in Roma, Sinti and digital rights about why facial recognition is an important issue (and what the rest of the digital rights community can learn), and check out the Reclaim Your Face campaign’s first ever resource in the Sinti language!

The 8th of April 2021 marked 50 years since the first World Romani Congress, an event which to this day signifies a celebration of Romani lives and culture, but also the barriers to rights, equal treatment and inclusion that are still put in the way of Roma, Sinti, Travellers and other Romani groups* across the world. With most areas of our lives increasingly turning ‘digital’, the purported benefits and opportunities of digitalisation can equally become additional inequalities for Romani people who have typically been shut out from access to digital skills and careers.

Today, there are at least 10-12 million Romani people across Europe, making Romani people Europe’s largest ethnic ‘minority’. And yet as groups such as Equinox Racial Justice Initiative have pointed out, the experiences and expertise of minoritised people like Roma and Sinti have been conspicuously absent in European policy debates and decisions. Take, for example, the recent EU consultation on artificial intelligence (AI) which came before the highly-anticipated proposal for a law on AI, but suffered from a lack of meaningful consultation with historically-marginalised communities from across Europe.

Biometric mass surveillance (BMS) is one of the applications of AI technologies that EDRi is campaigning to ban in the EU for being so harmful that no safeguards can make it safe. BMS means the use of systems – like facial recognition – which exploit people’s faces, bodies and behaviours to track, analyse and monitor them in public spaces. We have already seen it used in European parks, train stations, shopping centres, airports, schools and football stadiums. It can suppress each of our rights and freedoms to live freely and without the fear of being watched and judged at all times.

For historically marginalised communities like Roma and Sinti, BMS can single them out in ways that exacerbate already high levels of discrimination and exclusion. Romani people may also be especially sensitive to the ways in which BMS is based on an analysis of people’s facial proportions in order to put them in arbitrary boxes such as their predicted race, gender or even whether they seem suspicious or aggressive. Such practices have strong parallels, for example, with how the Nazi regime used biometric data to persecute and kill Romani people during the Holocaust. In recent years, data about Romani people have been used in a wide variety of other harmful ways. Read on to learn more about this from Roma and Sinti experts in digitalisation, Roxy and Benjamin.

As part of EDRi’s work on the Reclaim Your Face (RYF) campaign, we commemorated International Romani Day 2021 by speaking with Roxanna Lorraine-Witt and Benjamin Ignac about the intersection of Roma and Sinti rights with the rise of facial recognition and other forms of biometric mass surveillance.

Roxy and Benjamin are experts on issues of data, digitalisation and Romani rights, and they spoke to us to explore what biometric mass surveillance could mean for Roma and Sinti communities. They also spoke about how including Romani experiences and expertise can strengthen the digital rights movement and help drive resistance against biometric mass surveillance and other rights-violating practices: 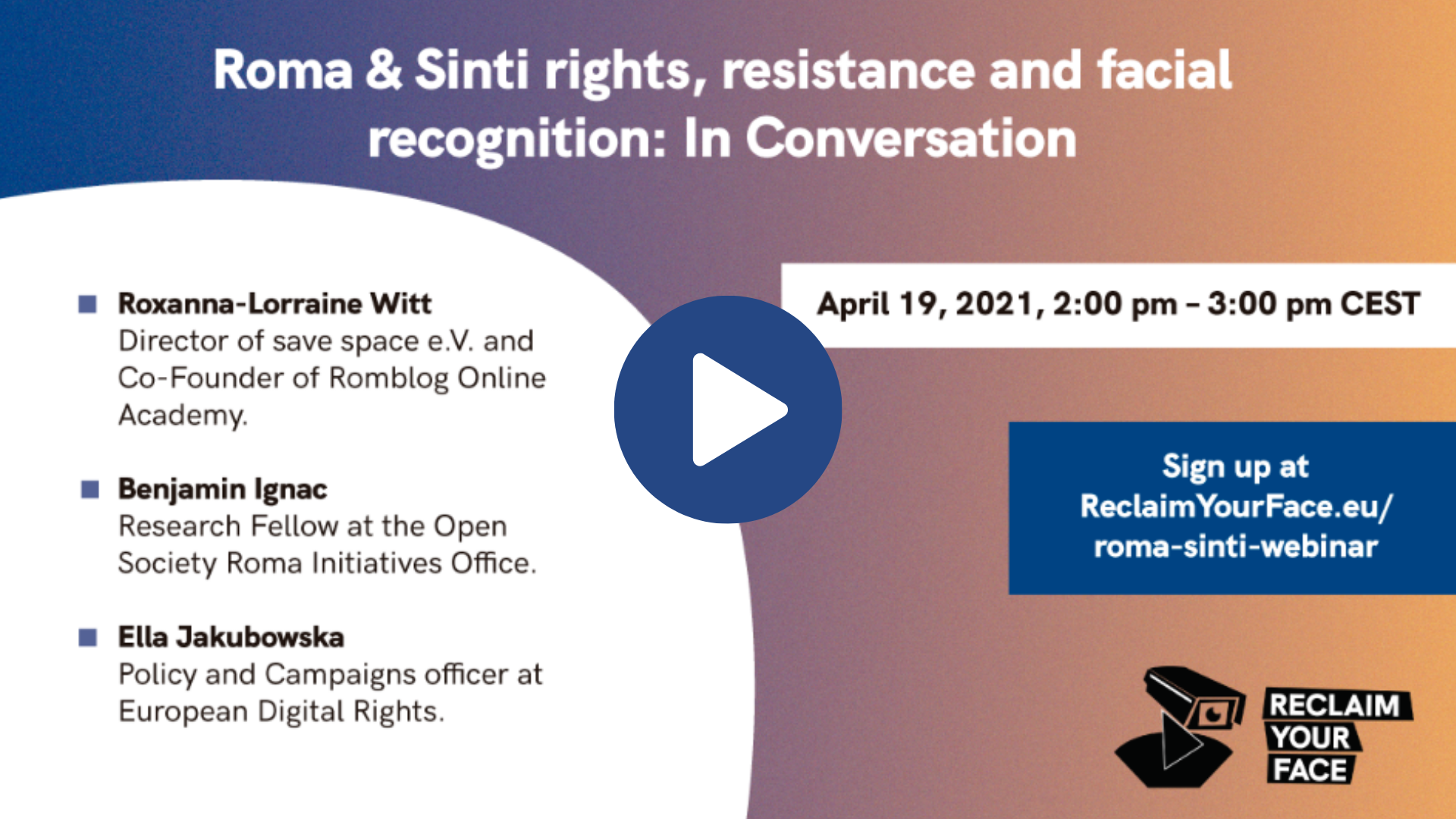 “I hate that I need to live in a world where I feel like I have to hide my Roma identity because this very identity can be used against me […] Having governments using this identity or data about Roma in that way is totally unacceptable. We should be proud of our identity […] [But] we have plenty of examples that in the wrong hands, data about Roma will be used against us.” – Benjamin Ignac

You can read the written highlights of the discussion here.

Our first Reclaim Your Face resource in a Romani dialect: the Sinti langauge!

We have also been working with Franz-Elias Schneck, the creator of the very first history video in the Sinti langauge. Franz has produced a video for Reclaim Your Face to explain what biometric mass surveillance is, why it is an important issue for Sinti people, and how it links to systemic issues that Romani people have long faced, such as racist policing practices: 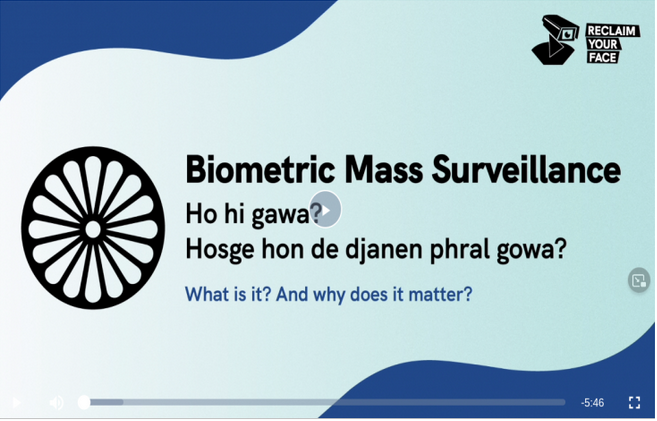 We are especially excited that this video is available in the Sinti-Romnes dialect, sometimes also called Rromanës-Sinti. It’s a type of Romani language which is most commonly spoken by Sinti people in Germany. If you don’t understand Sinti, do not worry: the Reclaim Your Face website homepage contains extensive explanations of what biometric mass surveillance is and why you should care about it. Plus, the site is available in 15 EU languages, with more coming soon – use the drop-down at the top of your screen to pick your preferred language.

After attending our International Romani Day webinar, the European Roma Rights Center invited Reclaim Your Face to feature on their Romani tea room podcast along with Benjamin, in an episode appropriately titled “You are being watched”. In the episode, host Sophie Datishvili points out that biometric mass surveillance practices – which EDRi and the Reclaim Your Face campaign have long warned are a major human rights issue – are likely to resonate with Roma because of the similarities to the discriminatory targeting via ethnic profiling that Romani people regularly face:

Whether you are Roma or not, the Romani tea room podcast is a powerful resource examining stereotypes, slavery, gender rights, surveillance and much more, all through the lens of Romani culture and experiences. Along with Sophie and Benjamin, we discussed intersections of facial recognition with issues of predictive policing; the EU’s notorious ‘iBorder CTRL’ project; systemic biases; and European “automated number plate recognition” technology – which has recently been exposed to have been linked with facial recognition identification in the Netherlands.

We also explored how the “invisible” nature of biometric mass surveillance means that it can cause harm to any of us without us even knowing it has happened – meaning that minoritised groups can often be most harmed due to structural discrimination, but that any person looking to walk around in public, attend a demonstration or even go to the shops can in fact be targeted. Because these practices are becoming more and more prominent in almost every European country, we agreed that there is a strong need to stop biometric mass surveillance before it goes any further, and therefore to prevent vast future harm to Romani and non-Romani people alike.

One thing has been clear to us as we have had the opportunity to speak with and learn from Roxy, Benjamin, Franz and Sophie: in law and policy-making, it is vital that everyone who is subject to laws and policies has a voice in shaping and contributing their expertise to those laws and policies.

Romani experiences offer a critical and at times harrowing insight into why it’s so important that we resist biometric surveillance practices that differentiate between people based on their faces and bodies. If we want a Europe that is truly inclusive, it is important that we make sure that everybody has equal and equitable access to the opportunities and benefits of digitalisation, and that everyone is properly protected from the harm that can arise from the use of these technologies, too.

When it comes to biometric mass surveillance technologies, they are so invasive, with such a huge potential for discrimination, that these severe harms vastly outweigh any potential benefit that they could have.

If you have found this blog interesting, we encourage you to inform yourself about Romani rights, the powerful work of Romani organisations and grassroots movements across Europe, and the issue of biometric mass surveillance with the following resources. If you’re an EU citizen, you can also sign our official EU petition below to add your voice to the call to ban biometric mass surveillance!

A note on terminology

*There is no single type of “Romani” person. Throughout this article we use the terms “Roma” and “Sinti” as nouns to refer to specific groups, although the term “Roma” can also be used more broadly to refer to all Romani groups. We use “Romani” as an adjective to describe association to all groups in the Romani community. There are many different Romani groups across Europe, with often distinct dialects and cultures. To educate yourself, check out our recommendations below.

If you're an EU citizen, you can help us change EU laws by signing the official #ReclaimYourFace initiative to ban biometric mass surveillance practices:

This is not a regular petition, but an official “European Citizens’ Initiative” (ECI) run by EDRi on behalf of the European Commission. This means your signature must be officially verified by national authorities, according to each EU country’s specific rules. We cannot control the data that they require, since it is required by Regulation (EU) 2019/788 on the European citizens’ initiative for the purpose of confirming your signature. We can only use the information that you provide in Step 2 to contact you with updates, if you choose to enter it. Furthermore, our ECI signature collection system has been verified by the German Federal Information Security Office (BSI) to ensure it is compliant with the EU’s Regulation on ECIs. Please see our “Why ECI?” page for further details, and check out our privacy policy.

This ECI is open to all EU citizens, even if you currently live outside the EU (although there are special rules for Germany). Unfortunately if you are not an EU national, the EU’s official rules say that you cannot sign. Check https://reclaimyourface.eu other ways than non-EU citizens can help the cause.

Note to German citizens: It is possible to sign our ECI petition if you live outside the EU, but German rules mean that for German citizens specifically, your signature will only be valid if you are registered with your current permanent residence at the relevant German diplomatic representation. If you are not registered, then unfortunately your signature will not be counted. You can read more information about the rules. This rule does not apply to citizens of any other EU country.

Legally, if we reach 1 million signatures (with minimum thresholds met in at least 7 EU countries) then the European Commission must meet with us to discuss our proposal for a new law. They must then issue a formal communication (a piece of EU soft law) explaining why they are or are not acting on our proposal, and they may also ask the European Parliament to open a debate on the topic. For these reasons, a European Citizens’ Initiative (ECI) is a powerful tool for getting our topic onto the EU agenda and showing wide public support for banning biometric mass surveillance practices.