Last update: 4 February 2016. The European Parliament is planning to adopt a non-legislative resolution on the Trade in Services Agreement (TiSA). The TiSA Resolution will be a political statement from the Parliament. This means that the European Commission, which is in charge of negotiating this trade agreement on behalf of the European Union (EU) and its Member States, will not be legally bound by it. However, this is an opportunity for the Parliament to update its previous resolution and send clear “blue and red lines”, as the rapporteur of the Resolution, Ms Viviane Reding (EPP) likes to put it.

The Parliament’s Committee on International Trade (known as “INTA”) is the lead committee in this Resolution. Nine Committees decided to elaborate Opinions to shape the report that INTA will submit to Plenary, before it becomes a Resolution (vote scheduled on 3 February 2016).

We have identified four key Committees that are addressing the issue, partly or fully, from a digital rights perspective: the lead committee (INTA), the Committee on Civil Liberties, Justice and Home Affairs (LIBE), the Committee on Internal Market and Consumer Protection (IMCO) and the Committee on Industry, Research and Energy (ITRE). Please, find below an infographic of the process in the European Parliament, our analyses and documents related to this resolution.

EDRi’s position on TiSA
TiSA’s resolution was ADOPTED
TiSA resolution: What are you going to do about it?
Press release: TiSA negotiations: the European Parliament’s strong position 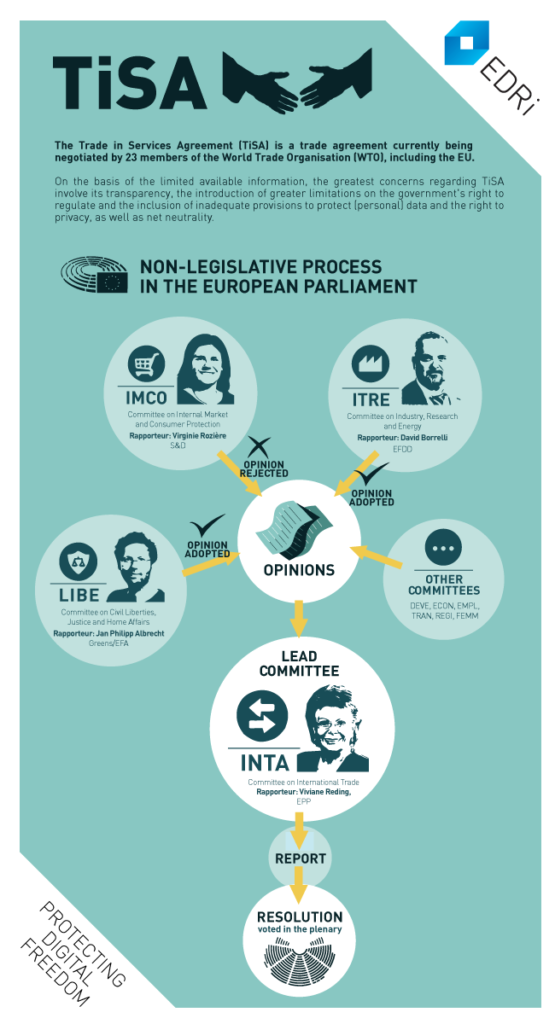