TTIP Resolution: what did the Parliament say about Digital Rights?

On 8 July, 2015, the European Parliament finally adopted a resolution on the Transatlantic Trade and Investment Partnership (TTIP). The TTIP resolution contains non-binding recommendations to the Commission regarding digital rights, among other topics.

At the beginning of 2015, EDRi published its red lines, which was later developed into a booklet “TTIP and Digital Rights”. On 8 July 2015, the Parliament did not fully listen to the concerns raised by many citizens. There are positive aspects to highlight, but the European Parliament’s Resolution breached some of EDRi’s red lines.

2. Investor-to-state dispute settlement (ISDS)
Unfortunately, the Parliament voted to change ISDS for a “new” system, which could still repeat the flaws of ISDS. 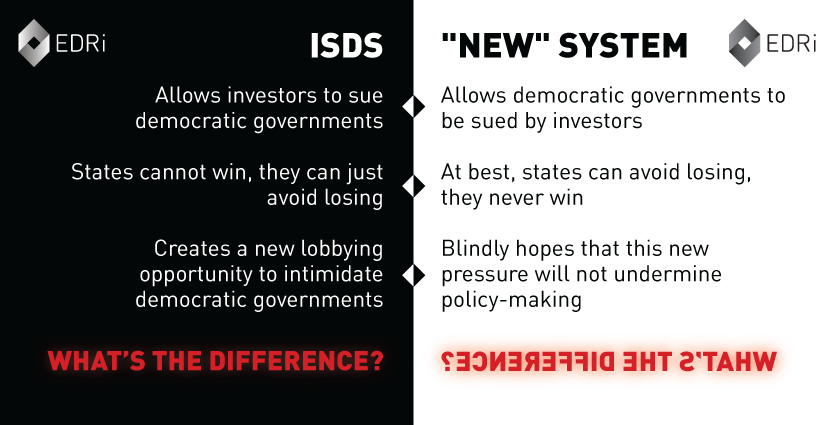 3. Guarantee the rule of law
Whereas both the Civil liberties and the Legal Affairs Parliamentary Committees recognised the importance of the rule of law in their respective opinions, the Resolution does not even mention the rule of law. The Parliament recommended that the Commission protect the EU’s right to regulate, but the recommendations regarding the so-called “regulatory cooperation” still raise concerns regarding the chilling effects it may cause to the EU’s legal and political framework.

5. “Intellectual property”
The European Parliament failed to follow the strong opinion of the Legal Affairs committee to exclude copyright, trademarks and patents from the negotiations.

6. Data protection
We welcome the European Parliament’s call to include a horizontal self-standing clause in TTIP to exclude the current and future EU Data protection legislation from being traded in TTIP. However, the Parliament failed to ask the Commission to refrain from negotiating on the flow of personal data in trade agreements, as the Parliament’s Civil Liberties Committee had requested.

7. Surveillance and Privacy
We welcome that Parliament reiterated that its consent to TTIP could be endangered if US mass surveillance programmes are not “completely abandoned”. Additionally, the European Parliament had the possibility to recommend the Commission to exclude “encryption standards, or the certification thereof, in the TTIP agreement, since there is no economic benefit to be derived, but rather a serious potential economic and societal loss”, but that amendment was rejected.

In sum, this resolution did not suffer many changes as compared to the report adopted in the International Trade Committee (INTA). TTIP’s resolution is just a political indication for the Commission and the world. Ultimately, the European Parliament will say yes or no to the TTIP once negotiations are concluded. In the meantime, it is important not to lose track of the negotiations and the conclusion of other agreements, such as CETA (the Comprehensive Economic and Trade Agreement between Canada and the EU) or TiSA (the Trade and Services Agreement).