In February 2012, hundreds of thousands of people took the streets in several European cities in order to protest ACTA. The fight was successful, with the European Parliament dismissing the agreement in the same year.

What does ACTA stand for? ACTA stands for “Anti-Counterfeiting Trade Agreement” – a multilateral agreement that proposed international standards for enforcement of intellectual property rights.What does ACTA not stand for? Our rights and freedoms, especially when it comes freedom of expression and access to culture as well as privacy.

The agreement was signed in October 2011 by Australia, Canada, Japan, Morocco, New Zealand, Singapore, South Korea, and the United States. When in 2012, Mexico, the European Union and 22 Member States signed as well, it resulted in widespread protests across Europe. Supporters of the agreement described it as a response to “the increase in global trade of counterfeit goods and pirated copyright protected works”. Opponents said it adversely affects fundamental rights including freedom of expression and privacy. Another reason to reject this agreement was the complete lack of transparency that surrounded the negotiation process since civil society groups, developing countries and the general public have been excluded from it.

Hundreds of thousands of citizens from an estimated 200 cities in Europe went out in the streets on a cold 11 February 2012, in a massive pan-european protest against ACTA and to support digital civil rights. 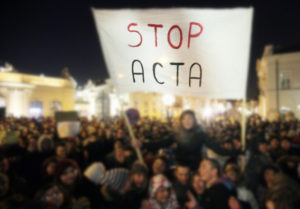 European Digital Rights actively participated in the global campaign against ACTA. EDRi produced many papers in order to raise awareness on the agreement controversial aspects, both in process and substance. Indeed, the way in which ACTA was negotiated has robbed it of both democratic credibility and legal clarity. If ratified, it would also have had major implications for freedom of expression and access to culture, the right to privacy, in addition to harming international trade and stifling innovation. Eventually, on 4 July 2012, the European Parliament rejected the agreement in plenary session, with 478 votes against, 39 in favour and 165 abstentions. 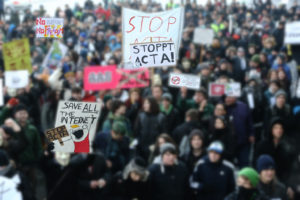 Finally, the European Parliament rejected ACTA – a great win for the EDRi network and its allies.