Back to the Future: Activism, the copyright Directive and lessons for the present

The Copyright Directive marked a key moment in internet history. Civil society, and EDRi in particular, have reflected on the role we played in the political debate and what would that mean for future digital policy fights. In this blogpost, we look back to assess the success of the strategies we adopted and what are the takeaways we should keep in mind when challenging current human rights threats like chat control and facial recognition.

On the night of 4 April 2022, police officers woke up residents in Santa Ana, United States with loud Disney tunes until a resident confronted them. An odd law enforcement habit? A homage to Disney classics? No.

The police played songs protected by copyright because they knew that YouTube’s automated filters would block anyone’s videos that may record potential police abuse. This is only one of many examples showing the risk of automating content moderation, whether to detect copyrighted content or “terrorist” material.

How did it all start?

After years of public consultations (see here and here), on 14 September 2016, the European Commission (EC) published the Proposal for a Directive of the European Parliament and of the Council on copyright in the Digital Single Market (in short: “the Copyright Directive”).

EDRi was active on the reform of the copyright framework even before the proposal came out. Based on our preliminary preparation, we launched Copyfails, an EDRi declaration with key constructive proposals to adapt the European Union (EU)’s copyright legislation to the XXI century.

We advocated for the harmonisation of freedoms to use copyrighted works (“exceptions and limitations”), to prevent privatised law enforcement and for authors to get a fair remuneration, among other feasible measures.

However, the Copyright Directive, as proposed by the EC, did not address almost any of our demands. Instead, as we covered in our joint analysis with Communia, the proposal outlined a picture in which users’ rights would not be harmonised, the levy for news publishers was concerning and the risk of the imposition of upload filters was more real than ever before.

Big Media and the entertainment industry’s strong lobbying power ensured that the EC’s proposal undermines users’ rights. As a result, both Big Tech companies and digital rights groups set off alarm bells but for different reasons:

EDRi was the first organisation (along with Communia and Copyright for Creativity) to raise awareness about the risks of Article 13 of the Copyright Directive, when most copyright experts were mostly focusing on Art. 15 (the “Google tax” or ancillary copyright article).

The very first panel that was organised in the European Parliament by the initial Rapporteur had two civil society groups attending, one of which was EDRi.

What did we do?

Along with Copyright for Creativity (C4C) we launched saveyourinternet.eu, a hub gathering and enabling people to be active on the Copyright Directive.

The website provided key information on the proposal, and engaged supporters to communicate key messages online, send emails and call MEPs. This allowed us to build a strong support base for our campaigning and people mobilisation efforts.

Save the Internet launched a petition against upload filters in 2017, which successfully collected over five million signatures. This mass action was crucial for motivating people to flood the streets in Germany as a form of protest against the Copyright Directive.

Actions on the ground

The “mob” and “bots” conspiracy theory

The debate got so heated that the EC engaged in disinformation. The EC celebrated the trilogue text and called civil society groups, protesting against upload filters, a “mob“.

Previously, the denomination policymakers had used was ”bots”, implying that there were no real people behind the online actions and that there were only bots running the campaign against Article 13.

The chief Europe correspondent of Politico Matthew Karnitschnig went a step forward and portrayed human rights activists as “jihadists”. This was a very low moment for the quality of democratic debate in the EU.

The EC’s communication was harshly criticised, and thousands of people reacted by going out to the streets to protest. We saw mass mobilisations in tens of cities across Europe, in countries like Germany, Austria, Slovenia, Poland, Denmark, the Netherlands, Finland, Sweden and Greece.

As a result, the EC deleted their blogpost, saying that it had been “misunderstood”.

In March 2019, a group of 17 advocates and activists put their studies and jobs on pause and came to Brussels and Strasbourg to exercise their civic right and talk directly to their policymakers.

EDRi’s Brussels office made their travel possible and stood next to them all the way until the end to support them in their efforts to make a final push to have upload filters deleted from the Copyright Directive. They were equipped with an impressive level of understanding of the impact Article 13 could have had on the internet and showed clear determination in their actions. 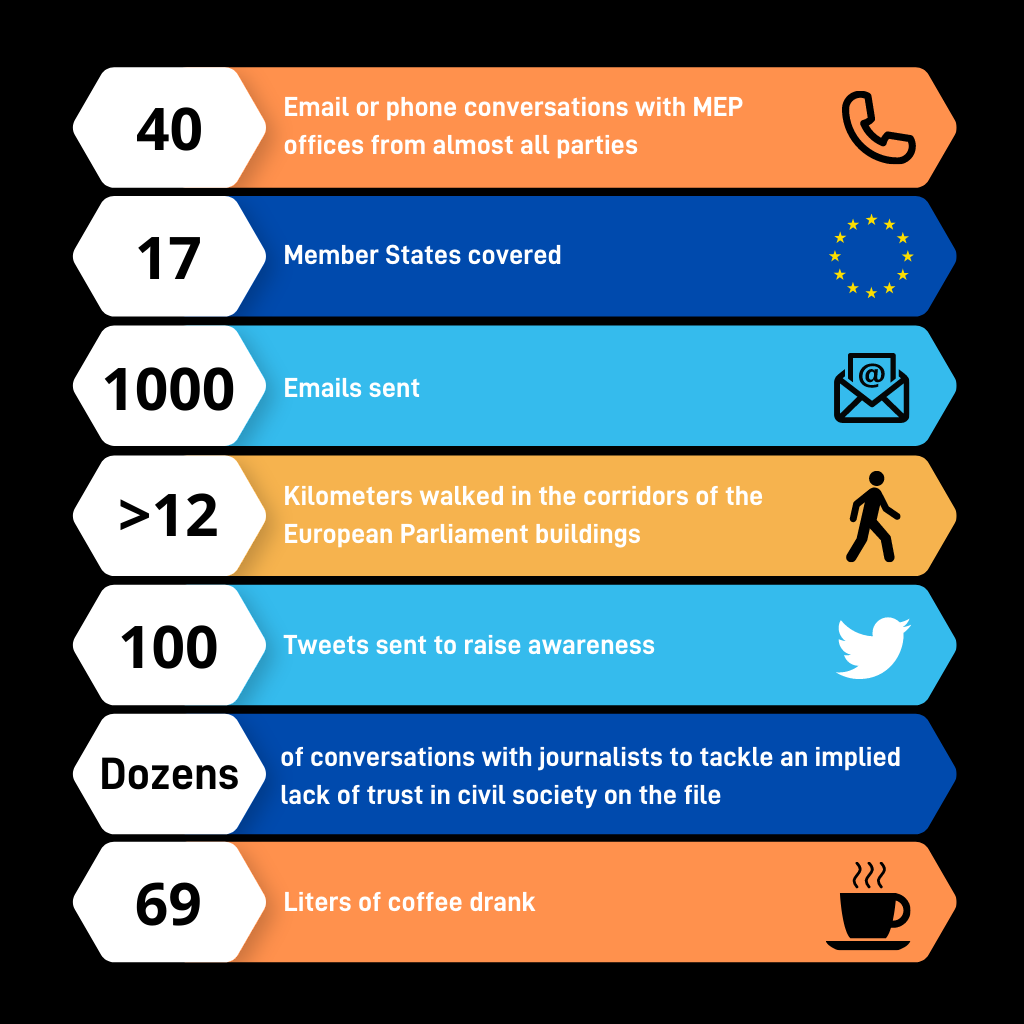 Action week proved to be very impactful as it resonated with the popular online petition and mass demonstrations in Germany and across Europe, which created strong momentum and achieved a lot of visibility.

Thanks to the work of the EDRi network and our allies, we made a significant impact on improving the text of Art. 13 (17). Our work helped achieve other wins too such as the protection of cultural heritage, better negotiation conditions for authors and the protection of the right to parody. The rejection of the negotiating mandate in plenary before the summer led to a new version of Article 17 that put user rights almost at the same level as rightsholders rights.

Thanks to our efforts the defence of the prohibition of general monitoring obligations got mainstreamed in the public debate despite being under threat during the Copyright discussions. This became the baseline during the discussions on the Digital Services Act:

Politico reported the following: “COPYRIGHT DIRECTIVE TRAUMA AND THE DSA: Commission official Marco Giorello pleaded to “avoid as much as possible for the DSA to become another copyright battlefield” at an online panel on the topic organized by The European Audiovisual Observatory.

The final vote: A win or a loss?

In March 2019, the European Parliament (EP) adopted the new Copyright Directive. While the music industry and collecting societies celebrated it as a victory for authors and creators, actual authors along with civil society groups were worried about the outcome.

In the vote adopting the Directive on 26 March, 55 MEPs, who supported Article 17 (former Article 13) in September 2018, changed their position and called to have it deleted from the final text of the Directive. The pressure coming from pop artists like Paul McCartney and from the entertainment industry was effective and the amendment was not voted.

The EU could have made history, and in fact be coherent with its future given the prohibition of general monitoring obligations in the DSA, but decided to side with the powerful.

Despite some policymakers repeatedly stating that the Directive would not lead to upload filters, it quickly became clear that it would. The day after the Directive was adopted, France hurried to declare that it will ensure that “content recognition technologies” will be a key aspect of the upcoming laws implementing the Directive.

Germany adopted the text with a written declaration stating that it would want to implement Article 17 largely without upload filters though it failed to fulfil its promise.

Nevertheless, Germany did have by far the most progressive implementation of Article 17 in national law that could become a model for the rest of the EU once that the European Court of Justice has confirmed that Article 17 must be interpreted very restrictively.

We want to thank everyone involved in trying to make the best possible out of the copyright Directive: activists, policy-makers, academics and technologists who in one way or another helped to improve the Directive and prevent worse outcomes. 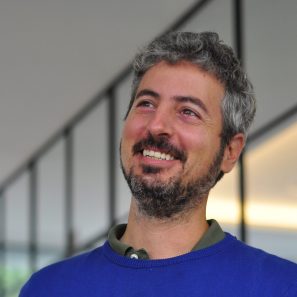 Do you want us to keep leading similar campaigns? Think about donating to EDRi, subscribing to our newsletter and consider joining our upcoming work to defend the confidentiality of our communications.