Civil society calls for the deletion of the #censorshipmachine

Today, 16 October, European Digital Rights (EDRi), together with 56 other civil society organisations, sent an open letter to EU decision makers. The letter calls for the deletion of the Article 13 of the Copyright Directive proposal, pointing out that monitoring and filtering of internet content that it proposes breach citizens’ fundamental rights.

The proposals in the Copyright Directive would relegate the European Union from a digital rights defender in global internet policy discussions to the leader in dismantling fundamental rights, to the detriment of internet users around the world,

The censorship filter proposal would apply to all online platforms hosting any type of user-uploaded content such as YouTube, WordPress, Twitter, Facebook, Dropbox, Pinterest or Wikipedia. It would coerce platforms into installing filters that prevent users from uploading copyrighted materials. Such a filter would require the monitoring of all uploads and would be unable to differentiate between copyright infringements and legitimate uses of content authorised by law. It undermines legal certainty for European businesses, as it creates legal chaos and offers censorship filters as a solution.

The letter points out that the censorship filter proposal of the Article 13: 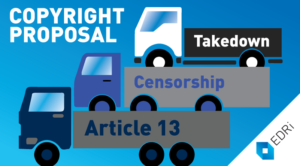 Read the letter below.

In September 2016, The European Commission published its proposal for a new Copyright Directive that aims at modernising EU copyright rules. The proposal has received mixed responses so far in the European Parliament and is awaiting a vote in the Legal Affairs Committee of the Parliament.

Fundamental rights, justice and the rule of law are intrinsically linked and constitute core values on which the EU is founded. Any attempt to disregard these values undermines the mutual trust between member states required for the EU to function. Any such attempt would also undermine the commitments made by the European Union and national governments to their citizens.

Article 13 of the proposal on Copyright in the Digital Single Market include obligations on internet companies that would be impossible to respect without the imposition of excessive restrictions on citizens’ fundamental rights.

Article 13 introduces new obligations on internet service providers that share and store user-generated content, such as video or photo-sharing platforms or even creative writing websites, including obligations to filter uploads to their services. Article 13 appears to provoke such legal uncertainty that online services will have no other option than to monitor, filter and block EU citizens’ communications if they are to have any chance of staying in business.

Article 13 contradicts existing rules and the case law of the Court of Justice. The Directive of Electronic Commerce (2000/31/EC) regulates the liability for those internet companies that host content on behalf of their users. According to the existing rules, there is an obligation to remove any content that breaches copyright rules, once this has been notified to the provider.

Article 13 would force these companies to actively monitor their users‘ content, which contradicts the ‘no general obligation to monitor‘ rules in the Electronic Commerce Directive. The requirement to install a system for filtering electronic communications has twice been rejected by the Court of Justice, in the cases Scarlet Extended (C 70/10) and Netlog/Sabam (C 360/10). Therefore, a legislative provision that requires internet companies to install a filtering system would almost certainly be rejected by the Court of Justice because it would contravene the requirement that a fair balance be struck between the right to intellectual property on the one hand, and the freedom to conduct business and the right to freedom of expression, such as to receive or impart information, on the other.

In particular, the requirement to filter content in this way would violate the freedom of expression set out in Article 11 of the Charter of Fundamental Rights. If internet companies are required to apply filtering mechanisms in order to avoid possible liability, they will. This will lead to excessive filtering and deletion of content and limit the freedom to impart information on the one hand, and the freedom to receive information on the other.

If EU legislation conflicts with the Charter of Fundamental Rights, national constitutional courts are likely to be tempted to disapply it and we can expect such a rule to be annulled by the Court of Justice. This is what happened with the Data Retention Directive (2006/24/EC), when EU legislators ignored compatibility problems with the Charter of Fundamental Rights. In 2014, the Court of Justice declared the Data Retention Directive invalid because it violated the Charter.

Taking into consideration these arguments, we ask the relevant policy-makers to delete Article 13.

Deconstructing the Article 13 of the Copyright proposal of the European Commission, revision 2
https://edri.org/files/copyright/copyright_proposal_article13.pdf

The Copyright Reform: a guide for the perplexed
https://edri.org/files/copyright/Copyright_guide_for_the_perplexed.pdf