EDRi continued to go to strength in 2014, with a hugely significant victory on net neutrality in the European Parliament and an innovative and successful campaign to raise the profile of our issues in the elections in May.

Our successes last year built on a strong development of the organisation in recent years. Since 2009, European Digital Rights has undergone major changes and evolved from a decentralised alliance with no staff to a growing organisation that is expanding its work and influence at the end of 2014.

Our annual report gives an overview how we continued to strengthen and focus the activities of the digital rights activist community in Europe and maximise the opportunities to campaign with a single voice. If you don’t have the time to read a long pdf, this post gives you a brief overview of what we’ve been doing in 2014.

Information technology has a revolutionary impact on our society. The threats and opportunities for our enjoyment of our democratic freedoms are growing exponentially – faster than our resources. The past year has shown how developments in the digital sector boosted freedom of communication and democracy but have also led to new approaches to surveillance. They are increasingly used to impose restrictions on fundamental rights. Our role is therefore to ensure that citizens’ rights and freedoms in the online environment are respected whenever they are endangered by the actions of political bodies or private organisations. In order to be able to continue our fight, we launched a fundraising campaign at the end of 2014. 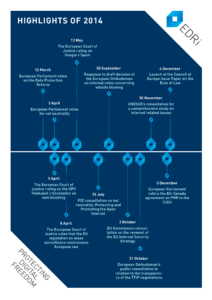 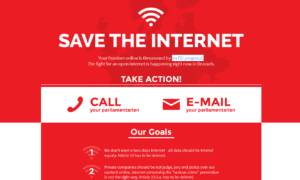 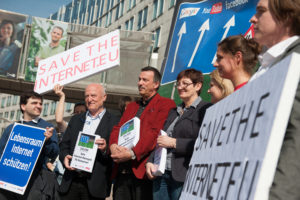 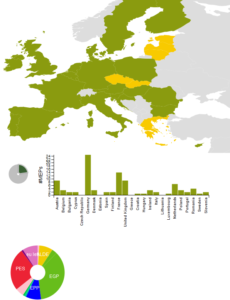 Privatised enforcement and the rule of law