Originally published on The European Sting

There is a lot of noise in the press and among lobbyists about an alleged hostility of the EU towards big American internet companies. Reality is more nuanced and more surprising – the policies appear to be hell-bent on giving Google new monopolies, to the detriment of European citizens and European internet companies.

The most astonishing of these policies is the proposal in the new Copyright Directive for mass, preventive filtering of information as it is being uploaded to the internet in Europe – a policy so restrictive and absurd that even China or Russia would baulk at the notion. An anti-Google measure? Hardly. Google actively lobbied the Vice-President of the European Commission about the alleged virtues of its content identification system (“contentID”), even if they hadn’t expected the Great Firewall of Europe to be the result. 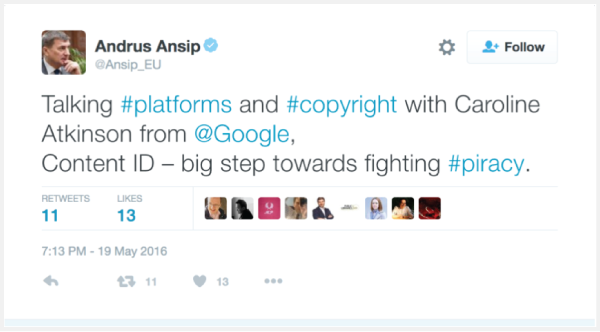 If the proposal gets adopted, Google owns the contentID technology, so would become the sole provider in a position to comply with the new rules without additional investment. Also, after investing tens of millions of dollars into developing the technology, it is uniquely placed to license such software to European internet providers. If European companies were obliged to adopt similar tools, they would be dependent on Google software or otherwise would have to invest high amounts to deploy a similar one – or risk getting sued for using less effective technology. Google currently uses contentID for ex post checks of uploads, allowing big content providers to delete users’ videos that include some copyrighted material, even if the material is fully compliant with copyright law.

The draft Directive is, unsurprisingly, somewhat incoherent. While imposing a general obligation to monitor uploads, it also indicates that an existing rule that prohibits a general obligation to monitor also stays in place. So, companies will have to invest in tools that have this functionality and will only have the opportunity, but possibly not the obligation (depending on how courts interpret the obtuse text of the Directive), to use it. It just happens that using this functionality gives them more safety from liability. As the rules are currently drafted, companies will have an obligation if they exceed an unspecified level of active engagement with the content.

In the same Directive, there is a proposal for a new “ancillary copyright,” whereby news outlets would be able to negotiate a fee for snippets of content to be used by services such as Google News or, possibly,Twitter – a policy often referred to as a “Google tax”. Hardly a pro-Google policy, right? Wrong. In Germany, where this policy has already been adopted, Google has the economic muscle to simply refuse to pay and suddenly it is not Google, but the publishers, who have a problem. Publishers put their content online in order for people to view it and to make money from advertising that is on their sites. They need Google News more than Google News needs them. So, the outcome is that everybody pays except Google. The Spanish government came up with a cunning plan, they passed a similar law to the one in Germany, but required Google News to pay. Result: Google News Spain shut down, to the detriment of smaller Spanish news outlets in particular and, again, everyone except Google loses.

The new legislative proposal is even worse than it seems. Despite the Commission’s best efforts, the EU recently adopted a world-leading Regulation that requires internet access companies to treat all internet traffic equally. Despite numerous complaints of discriminatory behaviour by the big online monopolies, no such obligation exists for Google to be non-discriminatory (i.e. not to sort content on the basis of its own business interests) in how it presents search results, ratings of businesses, news and so on. With the new copyright rules, Google will have a new legal obligation to have tools in place to interfere with content uploaded to its services, in real time, it will have a new legal obligation to agree (or not) to include news outlets in Google News. It is more than a little Faustian to believe that you do a deal to ask Google to be non-neutral, whenever this is to achieve whatever the European politicians want it to achieve and hope that Google will “do no evil” and not take advantage of its monopoly and legally mandated content regulation for its own benefit, to the detriment of European business, European citizens and the European online ecosystem.

Similarly, this Faustian deal, if adopted by the European Parliament and Council, would be to the detriment of freedom and democracy around the world. What credibility would Europe have when talking to Russia or China about online freedoms? Restrictions that have already been imposed, such as mass surveillance and data retention, are already thrown back at EU diplomats by foreign governments. Why, Beijing will ask, is the Great Firewall of China so bad, when this (from their perspective) implemented for the good of the society as a whole, when the Great Wall of Google is only designed to help a few copyright holders and, indirectly, Google itself.

Next stop for the proposal – approval, amendment or rejection by the European Parliament and the EU Member States. What should they say? In this bleak scenario, the words “Goethe” and “hell” spring to mind.