Evidence shows a European future that is dystopian: #ReclaimYourFace now to protect your city

The latest evidence shows that biometric mass surveillance is rapidly being developed and deployed in Europe without a proper legal basis or respect for our agency as self-determined and autonomous individuals. No one is safe, as our most sensitive data like our faces, eyes, skin, palm veins, and fingerprints are being tracked, traced and analysed on social media, in the park, on the bus, or at work. 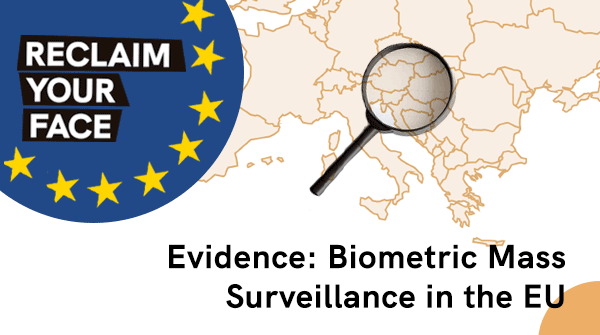 The spread of biometric mass surveillance across Europe brings to mind an image similar to the Chinese surveillance state, where omnipotent facial recognition is used to suppress and control people. While Europe prides itself on deep democratic roots that enable human rights and freedoms to flourish, the truth is that European governments and corporations are using technology in ways that invade our privacy, undermine our security, judge us for who we are and dehumanise us. With the new law that the European Commission is preparing on Artificial Intelligence (AI) fast approaching, we must look behind the veil of political games and industry PR. We are hurtling towards a society that resembles a dystopian sci-fi novel, but the use of these technologies is not inevitable – which is why civil society groups are fighting to #ReclaimYourFace and ban biometric mass surveillance before it is too late.

The Reclaim Your Face campaign has been investigating and exposing abusive and rights-violating uses of facial recognition tech, and other biometric mass surveillance, since its launch in 2020. The latest evidence shows that biometric mass surveillance is rapidly being developed and deployed in Europe without a proper legal basis or respect for our agency as self-determined and autonomous individuals. No one is safe, as our most sensitive data like our faces, eyes, skin, palm veins, and fingerprints are being tracked, traced and analysed on social media, in the park, on the bus, or at work. Our lives and personal identities have become the new commodities that profit-hungry companies and power-greedy governments use to extract information, predict behaviours or increase sales. For Europe’s racialised communities, the use of facial recognition systems within existing discriminatory predictive policing practices is even more harmful.

Is your city next?

It is not only happening in China and the US: there are numerous examples of how biometric technology is used in Europe to abuse and exploit our human rights, in our very own communities. For instance, in Germany, the police experimented with biometric mass surveillance on people travelling through Berlin’s Südkreuz station and surveilled G20 protesters in Hamburg. Police forces in Austria and Slovenia used facial recognition technology to identify protesters and to investigate petty crimes daily. Czech authorities use biometric technology from a company which boasts about its capacity to predict emotions, gender and link every person with their financial information, phone data, family, and colleagues.

Italian authorities have secretly spied on residents of Como to detect “loitering” and “trespassing”. Greece has similarly experimented with dystopian iBorderCTRL to detect whether people are telling the truth based on their facial expressions. French and Swedish children are finding that their privacy is being eroded with constant facial recognition at school. Poland joins the team with a fingerprinting system to manage school lunches, followed by Serbia widely deploying facial recognition cameras on the streets of Belgrade. In Denmark, AI-powered tech will decide whether you can go to your favourite football team’s game next time.

How to be your city’s digital hero?

These examples represent only a small part of how biometric mass surveillance is being used to suppress, silence and control people. You can help us to stop these harmful and dehumanising practices now. Join the Reclaim Your Face movement, led by over 55 organisations including EDRi, in collecting 1 million signatures for its official European Citizens’ Initiative (ECI) calling for a ban on biometric mass surveillance in our public spaces. 44.000 amazing supporters have already voiced our demand for a common future where we live with dignity, freedom and security. You can sign the ECI and find other ways to get involved at https://ReclaimYourFace.eu. Share the evidence we have collected with your friends and family to show them that we must act now against European governments and companies which are taking away our common places. Together we can preserve our democracy and set a world precedent of policy-making on AI which put people before profit.

We want to live in societies where our lives are not manipulated by power-hungry and profit-orientated technologies, and we can enjoy our dignity and freedom. We have the right to exercise our autonomy and self-determination free from abusive practices undermining our agency. The Reclaim Your Face’s ECI empowers Europeans to move and shape the public debate on the use of these AI-powered biometric technologies. We’re counting on you to help hold our leaders to account by calling on them to ban biometric mass surveillance.