Fighting for migrants’ data protection rights in the UK

Since 2014, the United Kingdon (UK) government has steadily rolled out policies to make the country a “hostile environment”  for migrants, in the words of Prime Minister Theresa May.

This has involved turning various ordinary institutions into border protection agencies. Banks have to collect and supply data to the Home Office (the UK’s interior ministry) on their customers’ immigration status. Landlords are required to check immigration documents before rental. Schools were checking pupils’ nationality and also sharing information with the Home Office, before a boycott campaign put an end to the practice in April 2018. Hospitals, too, must process immigration paperwork before they can deliver any non-urgent treatment. The police, in some regions, are piloting a handheld biometric ID device that instantly gives street officers access to an immigration database.

In the “hostile environment”, migrants are losing the right to live free of pervasive monitoring. They’re also losing the right to basic data protection. This is particularly evident in the case of a data-sharing agreement between the National Health Service (NHS), the Department of Health, and the Home Office. This agreement, established through a Memorandum of Understanding (MoU) in late 2016, without any consultation of professionals or the public, allows immigration enforcement officers to request patient data held by NHS Digital, the database manager for public health in the UK.

The Migrants’ Rights Network (MRN) has been at the forefront of civil society responses to this scheme. MRN, together with Doctors of the World UK, Docs not Cops (a group of professionals resisting the implementation of “hostile environment” measures in the health sector), and civil rights organisation Liberty, argues that sharing data between health services and immigration control officers violates migrants’ fundamental right to patient confidentiality. Such a breach of fundamental privacy rights is all the more worrying that the Home Office has error margins of 10 percent in its decisions to target “immigration offenders” – meaning they would routinely request data for the wrong individuals.

Crucially, introducing the possibility that health services might hand over patient data to the Home Office will make many vulnerable migrants afraid to seek care. This is already a reality. During a parliamentary hearing in January 2018, elected representatives heard the tragic story of an undocumented domestic worker who avoided treatment out of fear that she could be deported, and died of otherwise preventable complications.

MRN argues that such a situation dismantles the very principles of public health, starting with duty of care and public trust in health providers. The Home Office and NHS Digital have denied this, and argue that data-sharing for immigration enforcement is “in the public interest.” Yet the only other reason NHS Digital normally supplies confidential patient data to the Home Office is in the case of serious crime, such as child abuse or murder. By putting immigration and serious crime on a similar level, this data-sharing arrangement contributes to the dramatic criminalisation of undocumented existence (already exemplified in everyday language by the expression “illegal migrant”).

The UK Parliament’s Health Committee and the British Medical Association have both asked for data-sharing to stop. The Home Office have responded by saying they need to gather more evidence of the scheme’s impact, which could take more than a year. MRN believe this is unacceptable, as lives are currently at risk. MRN is thus challenging the data-sharing agreement in court. The organisation has obtained permission for judicial review (after appeal), likely to take place during the summer 2018, and is currently raising funds to cover its potential court costs.

MRN’s legal challenge is rooted in a desire to protect public health principles and vulnerable lives, but it also has broader implications for data protection in the UK. It aims to send a clear signal that data rights cannot be stripped on the basis of nationality. This is absolutely crucial at a moment when the UK’s latest data protection law, currently being debated in Parliament, includes an exemption clause for immigration enforcement, which would prevent migrants from exercising their full rights under the EU General Data Protection Regulation (GDPR). MRN thus hopes to set a positive precedent for judicial activism on these matters, and make a strong case for non-discrimination as a pillar of data justice. 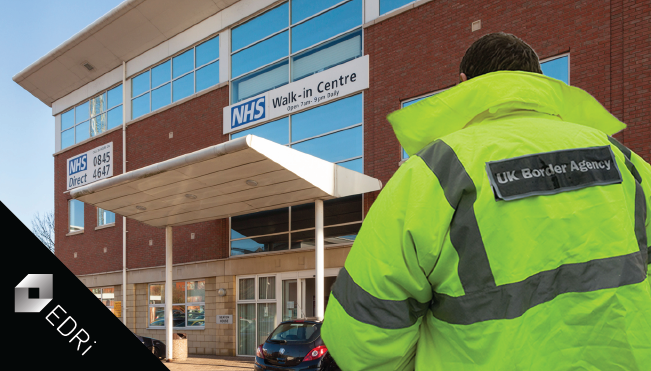 Against Borders for Children campaign: We won! DfE are ending the nationality school census!
https://www.schoolsabc.net/2018/04/we-won/

Crowdjustice fundraiser: Stop data-sharing between the NHS and the Home Office
https://www.crowdjustice.com/case/stopnhsdatasharing/

Making the NHS a ‘hostile environment’ for migrants demeans our country (24.10.2017)
https://www.opendemocracy.net/ournhs/erin-dexter/making-nhs-hostile-environment-for-migrants-demeans-our-country