Many feared (and some hoped) that the European Parliament’s JURI Committee vote on the 20th of June would be the end of our campaign, as well as the end of the open internet. Not so fast, the censorship machine is not a done deal!

In the next months, our main focus will be on ensuring that the position of the whole EU Parliament is against censorship machines. For this to happen, we will address all 750 MEPs around key moments. Below you will find an easy, yet detailed explanation of the opportunities we will have to challenge the censorship machine as the law makes its way through the EU decision-making process.

Step 1 – Before the summer break: Don’t allow JURI to negotiate in secret with the censorship-supporting EU Council

On 20 June, not only did JURI approve the Censorship Machine, but it also gave itself permission to represent the whole of the EU Parliament and fast-forward straight to negotiations with the EU Council.  This permission to negotiate is called a “negotiation mandate” and “negotiations” mean in this case secretive discussions to produce a “compromise” between the two different versions of the censorship machine: the one from JURI and the equally bad one already agreed by EU Member States in the EU Council. What could possibly go wrong?

Among the 750 MEPs, forces are mobilizing in order to challenge JURI’s self-permission for closed-doors negotiations on behalf of the Parliament, with the Council. As a result, it is very likely that on the 5th of July, the 750 Parliamentarians will have a vote on whether the JURI will keep their negotiation mandate.

ACTION 1 : We need to ask the 750 Parliamentarians to support having a proper democratic debate and to oppose the start of opaque negotiations! All EU countries have representatives among the 750 MEPs, which means your representatives are there too. They need to be asked to attend the meeting and vote in support of your freedoms. In order to succeed. we need at least half of the votes to oppose the JURI negotiation mandate.

Step 2 – September: Ask MEPs to think again and eliminate the text of the Censorship Machine proposal

If we succeed with STEP 1, the report JURI voted on the 20th of June will be re-opened for public discussions. MEPs can introduce new amendments (new edits) to the original Copyright Directive proposals, including amendments asking to delete Article 13 (the “Censorship Machine”).

ACTION 2: Contact your representatives and ensure that there are amendments calling for the deletion of Article 13 and that such amendments are supported. If good amendments get adopted, then a better text can be negotiated in the next stage of the process.

Step 3: End of 2018/early 2019: Encourage MEPs to vote against the censorship machine during the final vote

Either after an unsuccessful step 1 (if the negotiation mandate is approved, using the bad text adopted by JURI) or after step 2 (on the basis of a better text, after new amendments are voted on by the full Parliament), JURI will start negotiations with the Council. After the JURI vote, we published an overall predicted timeline of the file’s next steps. Once negotiations on the Copyright Directive proposal end, all MEPs will vote on the final text. The vote will happen during another Plenary session, this time the final one.

ACTION 3: We need to encourage all MEPs to support a good, legally sound, balanced Copyright Directive, that defends the rights and freedoms of everybody – and that means a Directive without a censorship machine – voting against the entire Directive, if necessary, although we really hope this will not be necessary. By that stage, it will only be a few weeks until the 2019 European Parliament election. This context will give you more power than normal to make your voice heard.

We have seen over 150.000 mails sent to JURI, together with over 15 000 tweets and 500 calls addressing our representatives. Protests are growing across Europe and the censorship machine gains importance day by day. In Brussels, we can see the difference that the engagement of ordinary citizens is having in the Parliament’s discussions. It is true that if JURI would have voted against the censorship machine, the fight would have become significantly easier. But JURI is only one Committee from the whole EU Parliament. Our chances are still high! Moreover, we are used to challenges. We had challenges in our fight against ACTA and we won. We had obstacles when we fought for net neutrality and we won.

We know that a smooth sea never made a skilled sailor.

Will you join us onboard? 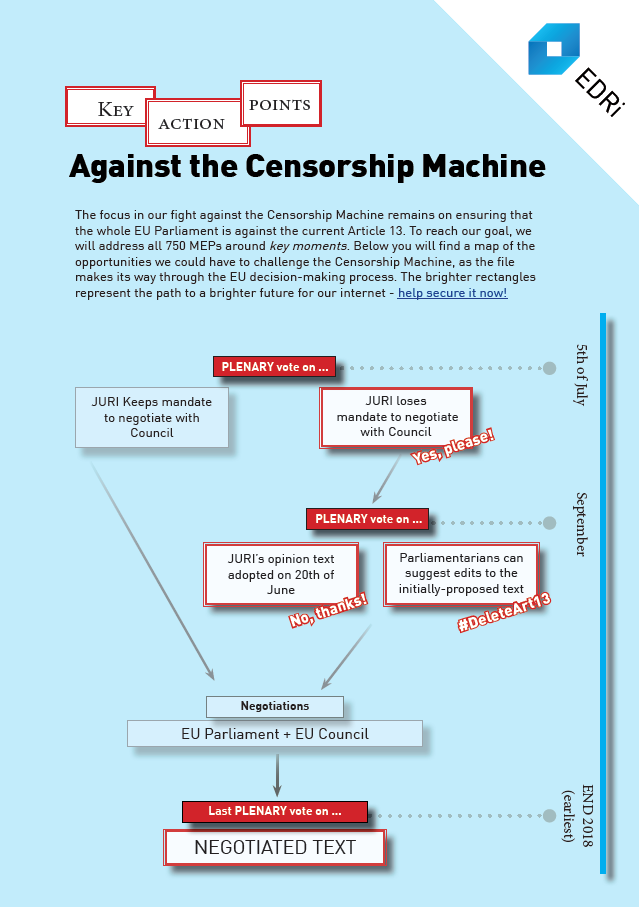 We can still win: Next steps for the Copyright Directive (20.06.2018)
https://edri.org/next-steps-copyright-directive-article-13/

Trialogues: The system that undermines transparency and democracy (20.04.2016)
https://edri.org/trilogues-the-system-that-undermines-eu-democracy-and-transparency/