On 5 September 2017, the Grand Chamber of the European Court for Human Rights (ECtHR) ruled on the Bărbulescu v. Romania case. It found that there was a breach of the right to family life and correspondence (Article 8 of the European Convention on Human Rights), as claimed by Mr Bărbulescu. Mr Bărbulescu was fired after his employer monitored his communications and found that he had used company property to exchange messages with family members. Although the ruling does not forbid employee monitoring, it clarifies how this can be done respecting fundamental rights.

The Grand Chamber questioned the earlier national court decisions. It noted that national courts did not properly assess whether Mr Bărbulescu had been warned that he might be monitored, and to what extent he would be monitored. The Court also clarified the limits regarding legal monitoring of an employee by their employer and the ways national courts should assess them.

First, one of the key aspects that the Court pointed out was the lack of information given to Mr Bărbulescu on the monitoring to which he might be subject. Second, the Court ruled that, in addition to the obligation of providing information, monitoring of employees always needs to be done for a legitimate aim, and in a way that is proportionate to that aim and that does not breach their privacy more than necessary to achieve the goal. None of these safeguards had been followed in this case, as the Court pointed out in the paragraph 140 of its ruling: “the domestic courts failed to determine, in particular, whether the applicant had received prior notice from his employer of the possibility that his communications on Yahoo Messenger might be monitored; nor did they have regard either to the fact that he had not been informed of the nature or the extent of the monitoring, or to the degree of intrusion into his private life and correspondence. In addition, they failed to determine, firstly, the specific reasons justifying the introduction of the monitoring measures; secondly, whether the employer could have used measures entailing less intrusion into the applicant’s private life and correspondence; and thirdly, whether the communications might have been accessed without his knowledge”.

It needs to be stressed that the ruling does not find monitoring of employees’ communications illegal in all situations, but that the power to monitor employees is limited. The judgement limits the employers’ right to monitor employees’ communications by limiting the scope and degree of intrusion, legitimate justification and proportionality of the monitoring. All of these should have been done in this case and should be in any similar cases in the future. The Court clarified that an employee keeps enjoying his right to private and family life also in the workplace. 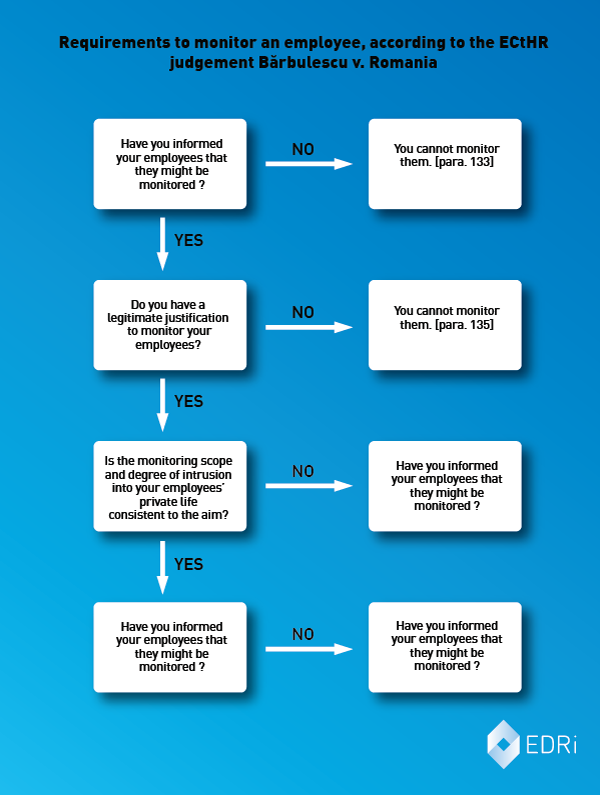 Romanian whose messages were read by employer “had privacy breached” (05.09.2017)
https://www.theguardian.com/law/2017/sep/05/romanian-chat-messages-read-by-employer-had-privacy-breached-court-rules