Policy makers put pressure on the EU to enact legislation for online platforms like Facebook, but also for small companies, to be legally required to engage in more and quicker privatised and unaccountable censorship.

On 12 April 2018, the Interior Ministers of Germany (Horst Seehofer) and France (Gérard Collomb) wrote to European Commission Vice-President Andrus Ansip and four other European Commissioners, to put pressure on the EU to enact legislation for online platforms like Facebook, but also for small companies, to be legally required to engage in more and quicker privatised and unaccountable censorship. In cases of failure to comply with obligations to remove reported content within one hour, France and Germany ask for the legislation to impose sanctions à la NetzDG. EDRi has obtained a copy of the letter (French/ German  (PDF)) and response that was sent by Mr. Ansip. 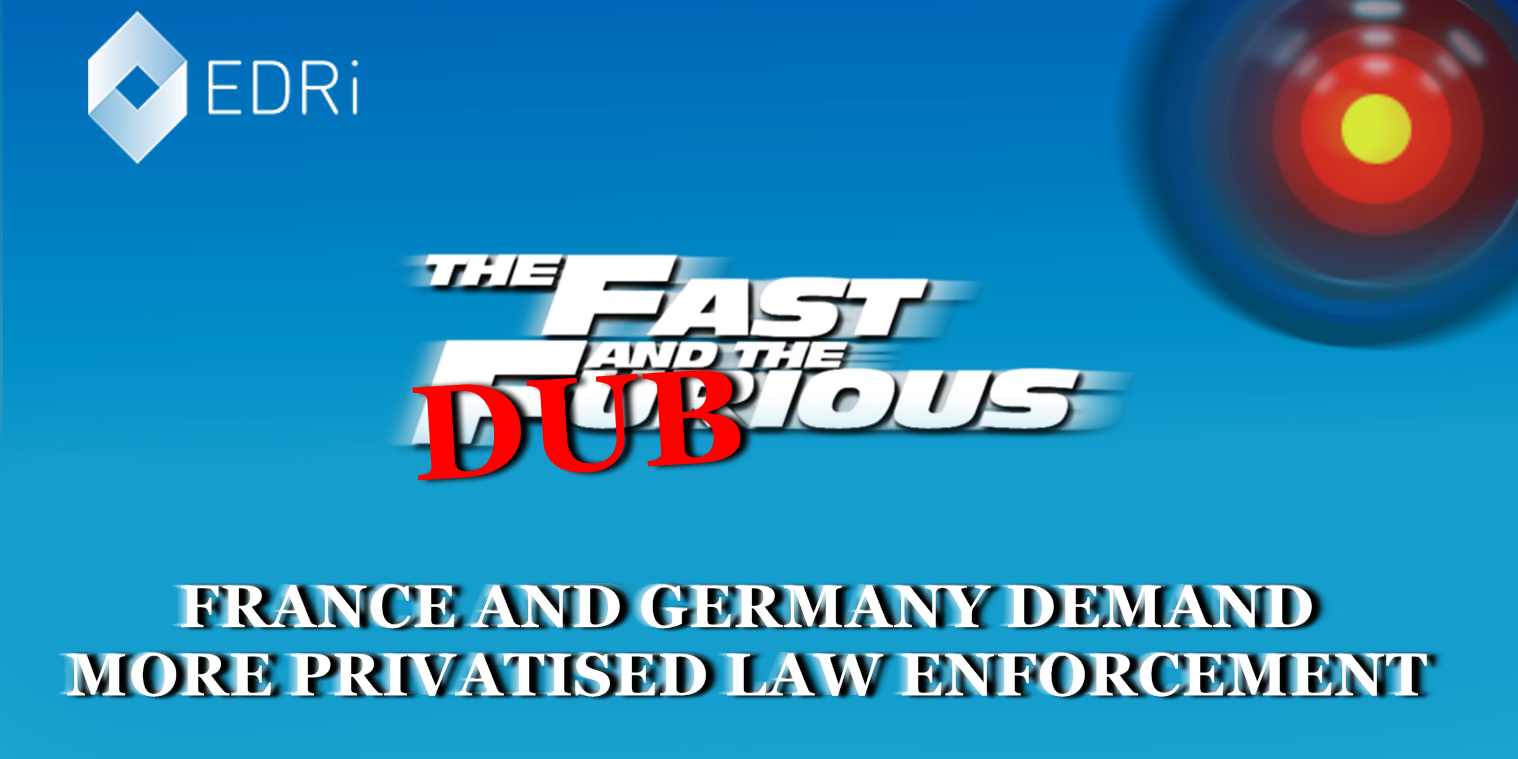 The Ministers demand that internet companies develop the “necessary” tools to “identify and remove” terrorist content and other illicit content – automatic censorship by algorithm. They also want them to exchange “hash values” to enable each other to filter uploads of that content.

Why? No evidence is referenced, or even mentioned. The role of states in fighting illegal content is not mentioned.

According to the Ministers, companies should process uploads and make a decision about censoring them very quickly. They propose that internet providers put in place systems (no such systems exist in the real world) in order for them to filter, process, identify, remove and prevent “illicit” content from being further uploaded within one hour.

Why? Because sixty minutes is a magical number. Again, no evidence to this end is referenced, or even mentioned. Again, the role of states in fighting illegal terrorist content is not mentioned.

As for transparency, they ask for statistics on the speed of removal, including the average speed to respond, and “information” about the hash database. However, they do not talk about statistics, about accuracy, nor about the volume of legal content being removed, nor about investigations of such content by states, nor about automated processes disrupting police investigations, nor about any statistics to identify and rectify any counterproductive impacts.

The Ministers explain that they have urged big online platforms to give logistical support to smaller platforms, because “smaller” providers are not able to remove content “fast”.

Why? Again, no evidence is referenced or even mentioned. What does “fast” mean? What is “logistical support”? Do they want all companies to behave like Facebook or Google?

They choose to forget that the European framework, the E-Commerce Directive, permits Member States to hold providers liable for failing to act expeditiously for failing to remove illegal content. It appears that holding providers accountable for breaching existing legislation is more difficult than turning Google or Facebook into an unaccountable internet police force.

What is the metric for assessing current procedures as being “too slow”? Where is the data that suggests that the response is inadequate? Where is the evidence that shows that Member States cannot use the liability provisions already in EU law? It appears that neither Interior Minister has any lawyers working for him. The letter goes on to explain that the non-binding Recommendation issued by the European Commission in March is an “attempt” to permit a more rigorous implementation of the already existing and already binding E-Commerce Directive that is already available to them. What was possible before that Recommendation was adopted is still possible now, and vice versa.

What is surprising is that both Germany and France seem to be pushing for rule of law violations, in the name of upholding the law. The Ministers seem to know that providers will never develop technologies that can process all uploads and make reliable, objective or accountable judgments on the illegality of certain kinds of speech. The Ministers know that, in reality, terms of service will be used to remove anything that creates risk of liability for them (a risk which would be very high, if decisions were needed within 60 minutes and if all breaches of that time limit are sanctioned, as the Ministers demand). Therefore, the Ministers demand the law make adjustments to the providers’ terms of service , moving the measures outside the traditional scope of human rights law (which is binding on states and not private companies).

In sum, in the five-page letter, not a single reference to the role and responsibilities of the state, to transparency about investigations and prosecutions, to the dangers of counter-productive effects, to review mechanisms, to freedom of expression, personal data protection and privacy, nor to the dangers for democracy of such unaccountable censorship powers in the hands of private companies, some of which are already accused of unfairly influencing elections.

What did the Commission has to say about all this?

On 31 May 2018, Commission Vice President Ansip responded. Ansip pointed out and praised the fact that there are already three initiatives in this regard: a hash-sharing consortium, the Europol Internet Referral Unit and the Radicalisation Awareness Network. Still, he seemed to agree that “more” needs to be done, without any specific evidence to back up this position..

He forgot to mention that there is virtually no meaningful transparency, no review processes, no statistics and no accountability about these initiatives. He also seems to have forgotten to mention the evidence backing the claim that, despite tall of the initiatives listed, further (unspecified) measures might be necessary. On a more positive note, he explained that the Commission is working on a “comprehensive” impact assessment, which will contain all relevant “data and facts” and which will list the various policy options in detail.

This is definitely a reassuringly more sober and more evidence-based approach than the rather frantic, populist approach of the two Ministers. However, as there is no data being collected on, for example, how many of the referrals from the Europol Internet Referral Unit even refer to illegal content or how many (if any) of the examples of allegedly terrorist content are ever investigated or prosecuted, this “comprehensive” analysis will be less comprehensive than it sounds.

Finally, we would like to remind that all Commissioners took an oath of office when starting their jobs (we highlight relevant parts in bold), which also mentions the obligations on states in their interactions with the Commission. Some elements appear to have been forgotten by certain actors in this process:

“I solemnly undertake:
– to respect the Treaties and the Charter of Fundamental Rights of the European Union in the fulfilment of all my duties;
– to be completely independent in carrying out my responsibilities, in the general interest of the Union;
– in the performance of my tasks, neither to seek nor to take instructions from any Government or from any other institution, body, office or entity;
– to refrain from any action incompatible with my duties or the performance of my tasks.

I formally note the undertaking of each Member State to respect this principle and not to seek to influence Members of the Commission in the performance of their tasks.

I further undertake to respect, both during and after my term of office, the obligation arising therefrom, and in particular the duty to behave with integrity and discretion as regards the acceptance, after I have ceased to hold office, of certain appointments or benefits.”