On 12 September 2018, the European Parliament (EP) adopted amendments to the European Commission’s draft EU Copyright Directive, as a result of the EP’s previous rejection of the Legal Affairs Committee’s proposals as basis for negotiations with the EU Council.

The aftermath of a law that regulates all internet companies in Europe as if they were Google and Facebook is clear: an internet in Europe where only Google and Facebook can survive. If such policies are approved, the Copyright Directive reform will be an act of outstanding self-harm for both European citizens and European businesses.

EDRi will continue to follow closely with the file’s next steps and advocate for putting Europeans’ rights and freedoms at the forefront of the negotiations with EU’s Council on the Copyright Directive reform. Next step: the final vote on the agreement between the Council and Parliament – expected in January 2019. 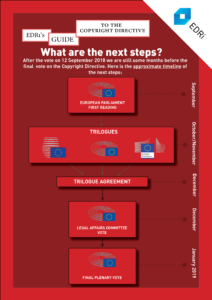