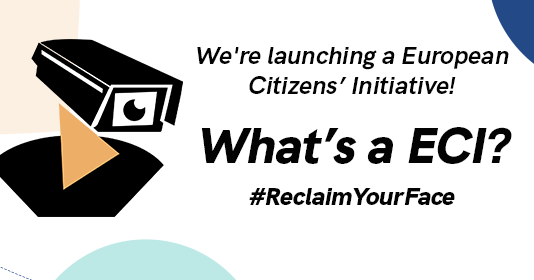 Opening for signatures in mid-February 2021, the ECI will ask over a million EU citizens to add their voices to urge the European Commission to ban biometric mass surveillance, for example the use of live facial recognition in city centers. Specifically, the ECI calls on the Commission to propose a legal act to permanently end indiscriminate and arbitrarily-targeted uses of biometric data in ways which can lead to mass surveillance.

Ella Jakubowska, Policy and Campaigns Officer at EDRi, a network of 44 organisations who are part of the initative explains:

“These technologies are used for discriminatory and surveillance purposes, with chilling effects on people’s ability to live freely, express themselves and organise in public. Reclaim Your Face stands up for a society where each of us can live without being treated as suspicious for who we are or how we look.”

The Reclaim Your Face campaign is a coalition of 22 civil society groups across Europe taking action to protect and preserve our public spaces as places for everybody’s free expression. This initiative is already making an impact on biometric data protection at a national level.

For news about the official launch of this ECI for public signatures, as well as to stay up to date with all the campaign’s national and European actions, supporters can follow @ReclaimYourFace on Twitter, Reclaim Your Face on Facebook, or join the supporters mailing list.

Launched in November 2020, #ReclaimYourFace is a European movement that brings people’s voices into the democratic debate about the use of our biometric data. The coalition challenges the use of this sensitive data in public spaces and its impact on our freedoms.

Our coalition is made up of 22 European civil society organisations united to protect fundamental rights in the digital environment.